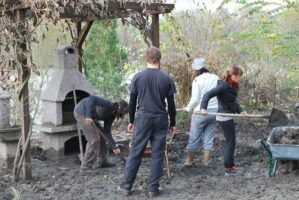 In the UK approximately 14 million people feel that their local community is more divided now than it was at the start of 2016. In response, large numbers of people are becoming more politically and socially active.

The Charities Aid Foundation has published new research into how people feel about their community and society in the aftermath of the EU referendum.

It reveals that people are more likely to believe that their community is more rather less divided than it was at the start of the year.

Perhaps as a result, people are becoming more socially active, whether through joining political parties, campaigning on social causes or volunteering to help in their local community. The increase is particularly prominent among younger people.

Nine million people say they are now more inclined to volunteer to help their local area.

CAF’s report: “A Stronger Britain”, sets out how charities can help tackle these social divides, embrace the growing public appetite for social activism and support government in developing Brexit policy.

A YouGov poll of UK adults commissioned as part of the research found that:

Nearly 14 million (26%) feel their community is more divided than it was at the start of the year. A significantly smaller number (12%) believe that community spirit in their area is more noticeable.

People are becoming more politically and socially active, with 30% saying they are more active in a social or political cause compared with the start of the year. This rises to 37% among those aged 16 to 24.

About nine million people (18%) say they feel more inclined to volunteer in order to help their local community now than they did at the beginning of 2016.

One in three people (33%) say charities are needed to support communities during the process of Brexit. Charities are also seen as the type of organisation most likely to provide effective support to those who need it at times of political and economic uncertainty, ahead of local authorities, government and opposition parties. Two in five (40%) say charities can help heal social divides.

CAF is one of Europe’s largest charitable foundations. It helps people and companies support the causes they care about and works with more than 50,000 charities, providing financial services designed for good causes.

“The way people feel about the country and about their community has changed significantly in the past few months.

“The EU referendum revealed a huge appetite for change. But until the process of Brexit is complete, the UK remains in a state of uncertainty.

“At this critical moment in our country’s history, charities have a crucial role to play in developing a better society and building Britain’s new place on the global stage.

“Huge numbers of people have been motivated to become more socially and politically active. For many, charities offer an opportunity for them to channel this enthusiasm to make a real difference.

“Making Brexit work for everyone and delivering a strong society will depend, in no small part, on making charities a core part of the UK’s new settlement. Government should embrace the expertise and influence of charities. This means working with them on Brexit policy, continuing to support the work of Britain’s charities at home and abroad and sending a clear message that charities have an important role to play in healing communities and giving people a voice.”