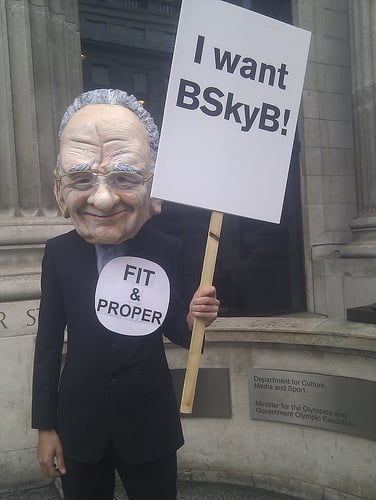 Yesterday the news broke that News Corporation was to set up a global ethics team at the behest of Rupert Murdoch, and in the wake of the phone hacking scandal.

The last two weeks saw the Church of England belatedly pull its News Corp investment and Rupert Murdoch set up an ethics team to address the fallout from the phone hacking scandal. The team is led by the corporation’s top lawyer, general counsel Gerson Zweifach,  who will act as a chief compliance officer with responsibility for the ethics program.

News Corporation is a global mass media corporation with interest in newspapers, magazines, books, music and radio, sport, film studies, digital media and TV.  In 2011, the corporation had revenues of $33.4 billion and employed 51,000 people. It was founded by current CEO and chairman, Rupert Murdoch.

In the UK, it owns The Sun, The Times and their Sunday sisters through News International. In addition, it owns book publisher Harper Collins, financial information business Dow Jones & Company and news operation Fox. It also owns 39.1% of BSkyB, the subject of a hotly contested and ultimately aborted takeover bid at the outset of the phone hacking scandal.

In June 2012, Murdoch announced plans to split his business into two operations to “unlock even greater long-term shareholder value”. On one side would be the aforementioned News International, Dow Jones and Harper Collins. On the other would be the media and television assets of Fox (news and films) and the stake in BSkyB. It is widely thought that this is to separate the deeply troubled publishing enterprises from the otherwise high performing media and television ones.

Everyone should applaud an attempt by News Corporation to clean up its act. It needs to after the company’s appalling behaviour during the phone hacking era and subsequent cover up. However, we should all remain sceptical of the company’s commitment to responsibility. To fool us once…

Approaching this from the ESG perspective i.e., environmental, social and corporate governance, News Corporation falls down on many levels.

Environmentally, Fox News has done more than almost any other organisation in the developed world to create scepticism about human-caused climate change specifically and global warming generally. In December 2010, an email was secured by Media Matters that showed a senior Fox News official had instructed the network’s reporters to  question the “veracity of climate change data“. In fact, poll after poll has shown that Fox News viewers are the most misinformed of all television viewers across multiple issues from Iraq, to climate change, health care, elections, etc. ad infinitum. Is it ethical that misinforming your viewers is an editorial policy?

While News Corp’s television interests in the UK are more regulated for balance than in the US, this is not the case for their newspapers. These often pour scorn on serious scientific research. This was born out by a wide-ranging comparative study by the Reuters Institute at Oxford University. It concluded that “climate scepticism is largely an Anglo-Saxon phenomenon, found most frequently in the US and British newspapers.” It must be unethical to misinform you readers. It is certainly hypocritical especially when your own organisation made it a goal to be carbon neutral, as Hollywood Reporter covered in 2011.

The first is wrecking our national discourse. The Sun and the now defunct News of the World have played a major role in trivialising the political debate, promoting celebrity culture, advocating conspicuous consumption, demeaning women and aggravating racial tensions through columns and editorials. They have hacked phones, bribed the police and aimed for the lowest common denominator in news reporting, often hurting those least able to defend themselves.

It remains a surprise that any reasonable person can judge that they are a ‘fit and proper’ organisation to hold media assets in the UK. Unless you’re a Jeremy Hunt, of course.

Through BSkyB, they have taken movies and sports off free-to-view terrestrial TV. By injecting vast amounts of cash into the latter, they have taken those sports from the grass roots and created monstrous individuals as role models for our children. The rather excellent Fry and Laurie created an excellent parody based on It’s A Wonderful Life, which showed us how great the UK could have been without Murdoch.

The second social role is in avoiding tax. From 1986, News Corporation’s annual tax bill has ranged around 7%. Few people would argue that Murdoch’s papers are a friend of the public sector. By reducing its tax bill to a level very few people could get away with, it fulfils its ambition of depriving the government and public sector of much needed money to pay off the national debt, reduce the deficit and pay for social housing, healthcare, education and the vital safety net of welfare in times of austerity.

As an avoider of tax, it has been a huge promoter of aggressive tax avoidance on an industrial scale, only choosing to report on the issue when it can hurt those it dislikes, while never mentioning its own avoidance in this arena. While we agree that you should only pay the tax you are required to, it cannot be ethical to aggressively avoid tax on this scale when the country is in so much debt?

From a corporate governance perspective, running a publicly listed business as a dynastic empire is hardly best practice or an internationally accepted norm. Obscure share structures, buying family members’ companies for high prices, installing various sons as heir apparents and acting as both CEO and chairman are just not acceptable in a modern business and certainly not an ethical one.

From every ethical, responsible and sustainable angle and every ESG perspective, News Corporation fails to meet any acceptable or recognised standard.  It has been rapacious, pernicious and vicious in its operations. Occasionally it throws out a good movie or bit of telly.

We genuinely wish Gerson Zweifach every bit of luck in his new role. He’ll certainly need it.