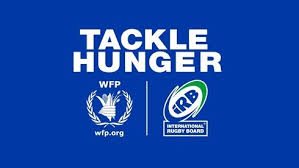 One in nine people – almost 800 million worldwide – do not have access to enough food and for children, this can have a devastating impact on their future health and well-being. Just as good nutrition and team work plays an important role in preparing to play rugby, the global rugby family have been uniting to support the work of WFP and their school feeding programme to enable children to get the food they need to reach their full physical and intellectual potential.

Rugby’s character-building values of teamwork and solidarity have been on display in a successful first for Rugby World Cup. With more than 2.2 million tickets sold to date, fans from around the world have generously engaged to donate more than £200,000 through the opt-in donation mechanism when purchasing their tickets – enough funds to provide over one million WFP school meals for under-nourished children.

World Rugby Chairman Bernard Lapasset said: “We have long believed in sport’s tremendous power to drive social change, and the response of the global rugby family to our Tackle Hunger partnership with the United Nations World Food Programme has been truly amazing. We have already funded more than one million meals to under-nourished children and with the UK Government ready to match each pound donated up to a total of £5 million through its UK Aid scheme, there has never been a better chance for the rugby family to unite and Tackle Hunger together.”

The Tackle Hunger campaign has been at the heart of the tournament and during the qualification process the iconic Webb Ellis Cup was guest of honour at a rugby festival played in rugby-mad Madagascar involving children who benefit from WFP’s school feeding programmes. Also on the international trophy tour, the Webb Ellis Cup was welcomed to WFP headquarters in Rome at the start of 2015 by Ertharin Cousin, WFP Executive Director, further cementing the strong partnership established back at RWC 2003.

The momentum has continued throughout the year including bespoke activations involving the 6,000 members of The Pack, the tournament’s volunteers, and campaign updates to fans across World Rugby, WFP and RWC 2015’s digital, social and broadcast channels. RWC 2015 commercial partners and suppliers including DHL, ITV and RTH have also offered their support to promote the Tackle Hunger message.

With Rugby World Cup 2015 ready to kick-off, the tournament phase of the campaign will see new and engaging social, digital and broadcast content available for fans to learn more about WFP’s work and how they can support it directly. A suite of activations will include online updates, videos and player appeals, match-day programme adverts, television slots, in-stadia promotion and multiple ways of supporting the campaign.