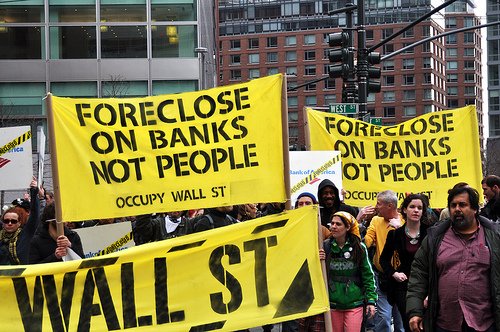 The fallout of the Occupy movement has sparked increased curiosity in socially responsible investment, according to an American asset management firm.

Matthew Patsky, chief executive of Trillium—a company that manages $1 billion worth of responsible investments—told InvestmentNews “as a result of the Occupy movement, we saw more inquiries from clients interested in socially responsible investing.”

The Occupy movement began in September last year, initially just in New York’s Wall Street financial district. Its aim was to protest against the so-called “greedy” banks, and encourage a shift towards social and economic equality.

The success of the Occupy Wall Street campaign spawned similar protests in 95 world cities, including London, Manchester and Edinburgh.

It appears that the continued societal destruction displayed by the banks in question—such as Goldman Sachs—has led the private investors to start asking questions regarding ethics and accountability.

“Occupy Wall Street raised a lot of issues that helped us [in] making sure we were articulating how we could have a positive impact in both social and environmental outcomes with peoples’ money“, Patsky added.

“I also think we’ve been more aggressive in terms of looking at opportunities in what we call community investments where there are higher social or environmental outcomes.”

In the UK, some £11 billion of private investors’ money is tied up in ethical funds—a figure that is growing rapidly as more people begin to realise the impact their investments can have on the real world.

Our recent in-depth report, The Guide to Sustainable Investment, is a good springboard into the sector and features interviews with leading organisations in the field—UKSIF and EIRIS.