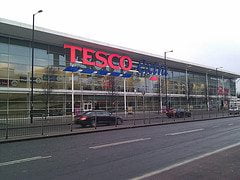 Ambitious, arrogant and ruthless were good words to describe Tesco at the height of its power. Every dealing with the company, every press report, every supplier and every customer taken for granted, marked the company out for a big fail. The City loved Tesco, they encapsulated everything a rapacious capitalist should be. Pride certainly comes before a (profit) fall.

Michael Solomon of Responsible 100 articulated this character perfectly in his excellent article about the 2013 Horsemeat Scandal. He took apart Tesco ‘apology adverts’ that were anything but. And then there was the massive accounting scandal revealed by a brave whistle blower. No accountant we know thinks this wasn’t a potential fraud that had gone on for years. Unsurprisingly, Tesco is ‘in talks‘ with the Serious Fraud Office over the scandal. What do we think? Prosecution or slapped wrist.

And let’s not forget the land banking, the desperate public petition to pay staff a living wage and the unsustainable tuna.

The company also admitted today that finally being forced to pay the non-living wage ‘Living Wage’ will cost them £500m. A significant recipient of corporate welfare, the British taxpayer currently tops up Tesco staff salaries to a living income. Perversely, that includes tax-paying Tesco employees themselves.

A profit fall couldn’t really happen to a nicer, more socially responsible organisation. One wonders if they swap notes with the management team over at Volkswagen.

Today, Tesco CEO Dan Lewis has tried to make best of another set of poor results, ‘quietly confident’ that his turnaround plan will be a success.

Tesco employs well over half a million people, 310,000 in the UK (1:100 jobs). It is the seventh largest private employer in the world. They have a 29% market share of grocery shopping. They represent just under 2% of the FTSE100 and 8% of its employees. Almost certainly your savings and pensions will be invested with them. We all need them to perform and behave  well, to be a beacon of good corporate governance with a real commitment to environmental and social responsibility. We need them to be part of the solution, not part of the problem. C’mon Tesco, be better.