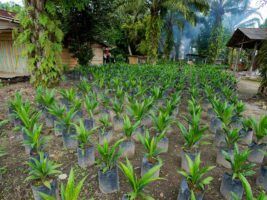 UK Companies ‘Leading The Way’ In The Sustainability Of Palm Oil

British manufacturers, food service companies and retailers that heavily use palm oil have ranked among the best in the 2016 version of WWF’s Palm Oil Buyers Scorecard, which has been launched today.

Many well-known UK companies are ‘leading the way’, on sustainable palm oil while others have failed to keep their promises to consumers or are still doing nothing at all to help reduce deforestation and other adverse impacts of producing the world’s most popular vegetable oil and we’re losing valuable tropical habitats and species as a result.

The 2016 edition of WWF’s Palm Oil Buyers Scorecard, looks at 137 major retailers, consumer goods manufacturers and food service companies from the around the world including key UK brands like Tesco, Sainsbury’s, Marks & Spencer, Waitrose and Morrisons among others.

“WWF has published this Scorecard in 2016 because we wanted to evaluate what companies actually did in 2015 and not what they said they would do. While we can report gratifying progress by many companies, too many fell short of their own commitments to their customers. Meanwhile too many companies are still hiding from this issue altogether. That is unacceptable considering the easy availability of certified sustainable palm oil.”

“More than half of the companies had promised us and their customers that they would be using only certified palm oil by 2015.”

While most of them did achieve their targets, it is a disappointment that 21 companies did not.

This is the 4th time WWF have assessed companies on their commitments and progress on sourcing sustainable palm oil. As with the previous WWF Palm Oil Scorecards, this one measures how companies performed on basic steps such as joining the Roundtable on Sustainable Palm Oil (RSPO), committing to and buying sustainable palm oil, and transparency. The Scorecard focuses on the year 2015, by which many companies pledged to consumers that they would be using 100% certified palm oil.

Palm oil plantations largely based in low lying tropical areas in Southeast Asia but increasingly in Africa and Latin America, produce 65 percent of the world’s traded vegetable oil. Palm oil is a key ingredient in many foods, cosmetics, soaps and detergents and is emerging as a significant biofuel stock.

“The scorecard shows a positive story for UK companies, many of which are ‘leading the way’. This is welcome news for British consumers who can have confidence that many of the products they buy contain palm oil that is not having negative environmental impacts. British retailers, manufacturers and food service companies have shown that in less than a decade it is possible to move to sustainable palm oil supply chains. With the volumes available there is no excuse for not sourcing RSPO certified sustainable palm oil.”

“We have been scoring companies on their palm oil policies and actions since 2009 and the progress made shows how an industry can change its modus operandi and embed sustainability concerns into their business model. With demand for palm oil expected to double by 2020 there will be increasing pressure on tropical forests and biodiversity, and risks of dangerous levels of greenhouse gas emissions being released. We need to see all companies committing to 100% sustainable palm oil and progressive UK companies should continue to pave the way for others to follow.”

More than two thirds of scored companies that committed to using only 100% certified sustainable palm oil by 2015 did reach or get over 90% of the way to reaching this target. Still a number of major brands fell short of their targets by 50% or more.

Consumers have a role to play in demanding full participation and transparency of all palm oil buyers across the globe in order to stem the tide of deforestation and affect true sector wide transformation. By visiting the scorecard website consumers can reach out to companies to commend those that are leading the way and to encourage others to do better.

WWF’s Living Planet report, found a 52% decline in vertebrate species populations, demonstrating that industries such as palm oil have no choice but to make supply chains sustainable. Species like tigers, Asian Elephants and orang-utans, habitats are potentially being threatened by unsustainable palm oil production.

“Unsuitable palm oil production, especially in Southeast Asia, is leading to catastrophic declines in rainforests throughout the region – home to millions of species, including iconic orangutans, tiger and elephants. Now, more than ever, we need companies to step up and source sustainably produced palm oil, which can help reduce deforestation and so support sustainable development.”