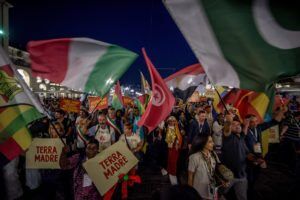 From September 22 to 26, Turin will be the cultural capital of global food biodiversity thanks to the 11th Terra Madre Salone del Gusto event, organised for the first time in the open air across the city.

Carlo Petrini, president of Slow Food, declared that, ‘The power of the agricultural and food multinationals is growing all the time, while financial speculation in foodstuffs is influencing the livelihoods and the very survival of millions of farmers the world over. On the opposite front, a multitude is emerging that is able and willing to change the rules imposed by an economy that is ruining the lives of the weakest among us, starting from the grassroots.’

Speaking at a conference at the Teatro Carignano, José Bové claimed that, ‘The recent fusion between Bayer and Monsanto is a very serious episode indeed, insofar as it puts us face to face with the creation of a gigantic corporation that controls seeds, fertilisers, herbicides and pesticides—not to mention medicines to treat any consequences they might have on human health—all at once.’

Slow Food works on a day-to-day basis with many farmers, small-scale producers, associations, movements and institutions in 160 countries to strengthen local economies and small-scale agriculture.

The humanity that represents Terra Madre took to the streets to assert that our food cannot depend on decisions taken by boards of directors concerned only with sales, profits and dividends.

Before the march, attending a ceremony at the Teatro Carignano, the President of the Italian Republic Sergio Mattarella paid homage to the Terra Madre delegates.

One of these, Dalí Nolasco Cruz from Mexico, a member of the indigenous Nahua people and coordinator of the Slow Food Tlaola Serrano Chili Pepper Presidium, declared that, ‘We have saved this traditional variety and made it an economic alternative for the indigenous peasant women of our community. These women have always been discriminated against for three reasons: first because they’re women, second because they’re indigenous, third because they’re poor.’

The world of agriculture is made up of big multinationals, but also by more than 500 million family farms that struggle day by day to defend biodiversity, promote native seeds and act locally to develop clean, healthy economies.

This multitude concretely endorses an alternative model and designs possible future scenarios in which food sovereignty will be developed and propagated, in which food will no longer be the slave of a faceless and unchecked market.

They may be giants, but we are millions.