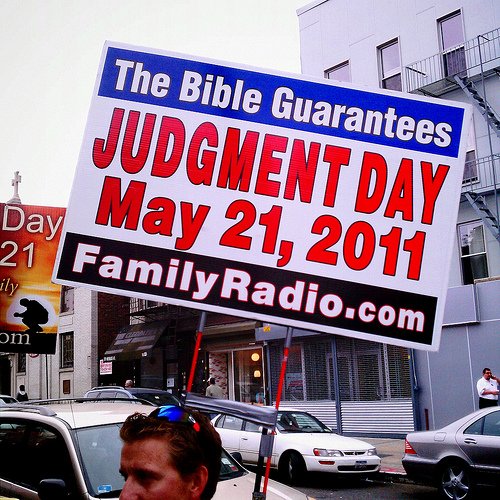 Wikipedia lists 187 predictions of the end of the world from 634BC to yesterday’s Mayarmageddapocalypscaust (apologies to Jon Stewart).On average, that’s one ‘end of the world’ for every 14 years. The typical human will experience just under five ‘ends of the world’ during their lifespan, one more if you live in a developed world country.

Early Christians inherited the Roman passion for predicting the end of the world, amongst other things – like Rome. Often these predictions are based on certain significant dates being reached (millenniums, etc.).

This forgets the simple fact that dates and years have changed in the west from Julian to Gregorian calendar (the last Julian day was Thursday, 4 October 1582 and the following day was Friday, 15 October 1582 – we lost 11 days that month and it’s now 13 days out of sync, which must have been one hell of a hangover).

They also vary considerably around the world. 2012AD is the Star Trekkian year 6762 in Assyria, but a baby-faced 101 in North Korea.

Predicting the end of the world is particularly popular with religions or cults and is often a fast track to amused media coverage and fortune, but not always.

American Christian radio broadcaster and young Earther Harold Camping famously predicted that the world would end on the May 21 2011, and then had to push the doomsday schedule back to October 21 2011, when the original date came and went, sans heavenly trumpets. Camping spent $100m on an information campaign for his end of times prediction and subsequently had a stroke.

When we talk about the end of the world, we often mean the end of human civilisation (X Factor, chewing gum, traffic jams, etc.). Scientists suggest the Earth, i.e., the big round, blue and green thing, will end sometime between five billion and 10100 years’ time (known as a googol – the number one followed by 100 zeros).

None of those should really give cause for concern unless you’re immortal.

In the meantime, Blue & Green Tomorrow will be focusing on the immediate threats of unsustainable financial markets, increasing pollution and waste, resources running out, population growth and climate change.

The only limiting factor on our ability to solve these problems is our creativity – so let’s not waste any of it on eschatological mumbo jumbo.

Ultimately, we may all face doomsday, but not today