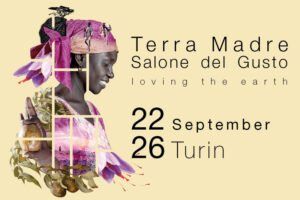 Terra Madre Salone del Gusto is an international event dedicated to food and gastronomy. The event gives supporters of sustainable food production, believers of small-scale agriculture and producers who “love the earth” a voice. The event includes exhibitions from companies across the world, conferences examining food production issues and forums dedicated to food communities.

Since 2004 (the year of Terra Madre’s first edition), Slow Food has been recognized as a representative of these themes both on an institutional level and in civil society. This role is made more evident by the recent appointment of Carlo Petrini as the FAO Special Ambassador in Europe for Zero Hunger, but also by the presence of Slow Food in the consultative process of European policies (and beyond); all this has been made possible thanks to the presence of the Terra Madre network of food communities in 160 countries. They will animate the event’s program in Turin with 11 big conferences at the Carignano Theater and 40 Terra Madre Forums at Valentino Castle and Torino Esposizioni.

Control of the food system, from seed production to fertilizers and pesticides, will be at the centre of the dialogue between Marion Nestle, globally-renowned expert in food politics, and José Bové, activist and Member of the European Parliament, in a meeting entitled: “They Are Giants, But We Are Millions”. Meanwhile, another conference will focus on agricultural practices able to promote diversity and protect natural resources in “Can Acroecology Feed The World?” with Miguel Altieri, one of the most influential exponents of this applied science, and Yacouba Savadogo, the man who brought part of the Sahel back to life through the use of traditional techniques of cultivation. In another conference, the economists Serge Latouche, Eric Holt-Gimenez and Stefano Zamagni will debate the idea of sustainability and infinite growth in a world of finite resources in “Another World Is Possible – And Necessary”.

Across three more conferences, the directors of Turin’s most important museums will speak to artists and experts of international fame: in “Earth Seen From Above and Through the Faces of Humanity” Alberto Barbera of the National Museum of Cinema will meet Yann Arthus-Bertrand, the director and photographer that has been filming the Earth from the sky and documenting humankind’s impact for over 30 years; in “Our Relationship with the Earth Through Contemporary Art” Carolyn Christov-Bakargiev of the Gallery of Modern and Contemporary Art will converse with the Indian artist Amar Kanwar, exploring art’s capacity to recount the political transformations that affect the environment and the landscape; in “Food and Agriculture in Egypt, Yesterday and Today” Christian Greco will lead a journey of discovery through one of the world’s oldest agricultural traditions, while sociologist and Egyptologist Malak Said Ahmed Rouchdy will discuss the predominant role of food in the crises that have recently afflicted the country.

Alice Waters, Ron Finley and Edie Mukiibi will talk about gardens, from the African countryside to the courtyards of American schools, and how they are triggering an urban and rural revolution. Four internationally renowned chefs, Gastón Acurio, Michel Bras, Olivier Roellinger and Altin Prenga, will talk about When Chefs Side With Farmers, and their roles as spokespeople for culture, ecology and ethics. Franco Berrino and Andrea Pezzana will explore the impact Our Daily Meals have on our health, while the founder of Emergency, Gino Strada, the cartoonist Zerocalcare and Edward Loure Ole Parmelo, winner of the Goldman Environmental Prize, and other guests will analyse the relationship between Land, Conflict and Migration. There will also be a conference (in Italian only) on Food and Agro-Mafias with Don Luigi Ciotti and Giancarlo Caselli, together with a theatrical show by Tiziana di Masi.

In the 40 Terra Madre Forums, designed as a space for sharing and exchange between the delegates of Terra Madre and open to the public, many more topics will be addressed, such as the environmental impact of eating meat, the scarcity of drinking water, the consequences of monocultural (and often transgenic) agriculture, the value chains of cacao and coffee, the worlds of oils, cheeses and raw milk.