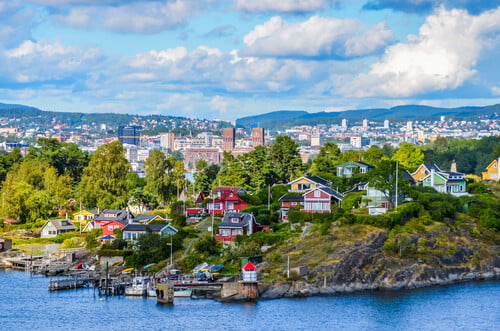 All Northern European countries seem to be world leaders in environmental progress and policies adopted. After Stockholm and Copenhagen won the title of European Green Capital as a recognition for their green policies and achievements, Oslo is the third Scandinavian city to win this award. The city has applied for the title the third year in a row and the efforts finally paid off. As the city with one of the lowest carbon footprints in the world, the title seems to be more than rightful in Oslo’s case.

To apply for the title, cities must have above 100,000 inhabitants and they should, obviously, hold very high environmental standards. Besides, the cities that apply for the title should have a solid portfolio of sustainable urban development initiatives and create a number of green jobs. But how did Oslo and Norway as a whole manage to win this award? Below are some of the measures adopted to become greener.

Norway has an ambitious plan of creating electric airplanes by 2020. Rolls Royce and Siemens are currently collaborating with Avinor, the owner of all Norwegian airports to create a full-electric hybrid plane by 2020. And Norway’s ambitious plans don’t stop here. The main goal of the project is to convert all flights up to 1.5 hours to these types of hybrid planes. The flight demand for domestic flights and other Scandinavian capital links would be successfully met by 2040. Overall, this will result in lower carbon monoxide and greenhouse gas emissions. Another environmental issue that will be partially solved by Norway’s ambitious plan would be the noise pollution reduction.

Over the past few years, Norway has shown a growing interest in electric vehicles. In the past few months of the last year, the tendency has been visible with a drop of 2.2% in petroleum products sales. 50% of the vehicles registered in Norway are electric. The proportion is significantly higher than in any other country in the world. The government is offering plenty of financial perks for electric car owners and if you step in Oslo, the image is like a Tesla commercial. Almost everybody is purchasing such vehicles. Norway’s plan is to reduce and potentially end gas and diesel vehicle sales by 2025, considering the negative environmental impact that those have. In about a decade, Oslo predicts or, at least, intends to reduce CO2 emissions by 95%. This would make the Scandinavian capital one of the leading cities in the world when it comes to air cleanliness.

The Fight Against Food Waste

Norway has a sustainable perspective in regards to all social areas and food waste is an environmental issue that many countries in the world struggle with. Lately, numerous establishments in the food and hospitality industry have been using the Too Good to Go app to reduce and potentially stop food waste. What does the app do, more specifically? It “matches” leftover food coming from various restaurants, hotels, bakeries and cafes with people who would rather buy those than see them go to waste. The prices are significantly lower than those featured by supermarkets and shops.

The initiative has been successful until now and the number of people and facilities using this app or similar ones is expected to rise in the following years.

Packaging is generating immense volumes of plastic that end up in landfill or water. Norway, in its mission to reduce plastic waste and use, especially in its supermarkets has been replacing the plastic ones with paper or recycled ones. By 2020, the use of plastic in Norway’s case is expected to drop by 1,260 tons.

Many businesses started to use business signs only manufactured form recycled materials to align better to Norway’s waste reduction goals, the experts at Signomatic claim.

Fruits and vegetables are expected not to be packaged at all in the near future and plastic salad bowls found in supermarkets have been already swapped for cardboard ones.

This new concept was invented in Stockholm and has now reached in full force Oslo. The term defines the act of cleaning up the litter found in nature while also exercising and it is a great way to mix something good for the environment with something good for the individual self. It is especially practised in those areas where waste collection and processing is not well-rooted, areas like forests and bare land.

The pant system has been implemented in numerous European countries and Norway is one of those lucky countries to benefit from it. The system is basically a reward-based one that is applied to plastic bottles and aluminum cans equally. When people purchase goods in plastic bottles or aluminum cans, they pay a higher price for the good. They have the possibility to return the bottles or cans and they receive monetary rewards for each one (around1-2.5 NOK). People can find return machines in all supermarkets and one finishes to load their bottles, they will receive a receipt which can be sued for purchases in that particular supermarket. Some even allow exchanging the receipt for the money. You can even choose to donate your receipt to charity.

In the case of various disasters, Norway surely is ready to solve the new crop issue. The Seed Vault on the Svalbard archipelago is specifically what it sounds like. A vault where seeds are kept safe to be used in the event of a global catastrophe like nuclear war, geopolitical disaster or climate change. Being fully aware of the importance of the vault, Norway invested in 2018 USD $ 13 million to modernize it, as a present for the vault’s 10-year anniversary.

Like it or not, Norway is a country with a keen focus on greening itself and investing in a green future. Could these measures be applied in other European countries? Certainly yes, if the legislative system is modified in such a measure to focus more on such matters. But until then, we, the rest of the less green world citizens can look with amazement what this county achieved in the past decades.