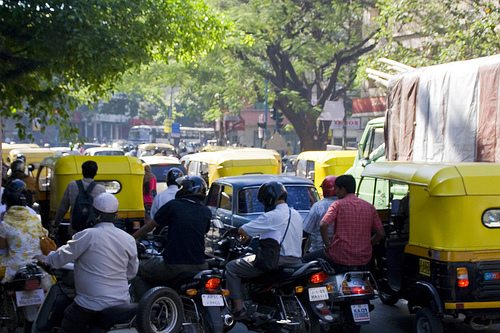 With cars and motorbikes dominating India’s roads – leading to pollution, congestion and road traffic accidents – a new campaign has been launched to promote sustainable transport in the country.

The campaign, run by the Union Ministry for Development and broadcaster Doordarshan, highlights how India’s public transport system has been neglected because of a car-centric approach in its infrastructure, the Press Trust of India reports. The month-long initiative aims to get locals to think of the eco-friendly alternatives such as walking, cycling and using buses.

A series of videos have been released to demonstrate the dangers and impact the current transport system poses. For example, traffic jams and the danger of cycling in Kolkata, the capital of the West Bengal state, has led to cycling being banned on 174 major roads. This makes it difficult for environmentally conscious Indians to travel by bike and has had a particular affect on the labour class.

The video argues that by banning cyclists from some roads, Kolkata appears to be promoting pollution, creating vehicles rather than moving towards sustainability. In contrast, Nanded, which is located in the state of Maharashtra, was praised for redesigning roads to create separate lanes for pedestrians, cyclists and motorists in 2005.

The country recognises the need to implement a more sustainable transport policy, particularly as it is poised for rapid economic and population growth. The National Urban Transport Policy notes that because of this, mobility needs must look to the future and the government has stated that it seeks to bring about “comprehensive improvements in urban infrastructure”. [http://urbanindia.nic.in/policies/TransportPolicy.pdf]

The current system presents a number of challenges, including the amount of time consumed travelling – impacting on the accessibility of jobs, education and recreational activities – and the cost of travelling, especially for the poor.

Non-motorised modes of transport have also become increasingly risky. Between 1981 and 2001, the number of people killed in road accidents in India increased from 28,400 to over 80,000. The vast majority of these were cyclists and pedestrians, highlighting the current risk of travelling more sustainably.

In order to combat this, the government has set out a plan to make its infrastructure more sustainable. Planned changes include making the allocation of road space more equitable, encouraging the use of public transport and establishing multi-modal public transport systems.