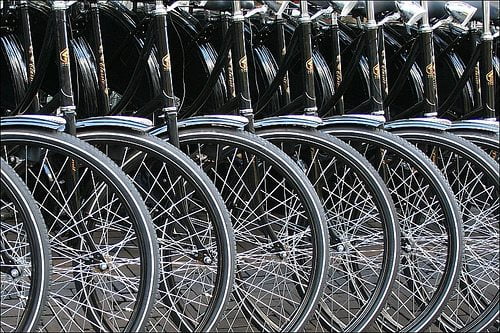 “Every time I see an adult on a bicycle, I no longer despair for the future of the human race”, the author HG Wells once said. For a man with some pretty bleak predictions for future societies, as anyone who has read The War of the Worlds or The Time Machine will testify, this is some immense pressure upon and great faith in this humble mode of transport.

Whilst the relationship between two wheels and the next few hundred years of mankind is not necessarily a direct equation, there is no doubt that cycling has a huge number of benefits.

Of course, most people are less concerned by the humans over the next few hundred thousand years than they are about those humans living with them at the moment, and here too cycling is a winner. According to numerous stats and surveys, happier, healthier and wealthier societies cycle, or cycling makes societies happier, healthier, and wealthier. A case of correlation rather than causation perhaps, but one that is compelling.

Carbon emissions seem to the measure du jour and according to a study by the European Cycling Federation, on this factor alone, cycling as mode of transport certainly wins, emitting 21g of carbon dioxide per kilometre as opposed to 271g for a car. Not an insignificant ratio, although one that has less benefit than could be the case given the small number of journeys taken by bike.

Only 2% of all journeys in the UK are currently on two wheels. I would bet that those journeys are some of the more enjoyable, with less road rage, cheaper, given the fuel prices and costs of running a bike, as well as faster if over short distances. Commuter cyclists in London are often seen whizzing past their car driving counterparts stuck in traffic, irate drivers getting frustrated as they nip in and out (sometimes in the wrong manner) of cars. Aside from environmental impact, cycling is often a happier pastime.

UNICEF’s index of child wellbeing positioned some of the more bicycle heavy nations towards the top, with the Netherlands one of the best. A bike does not guarantee a happy child and improve their life, but an active healthy upbringing surely helps.

The same is true of adults. Recent sunny weather means that I have seen hundreds of people cycling along; smiles on faces and stress levels no doubt reduced a notch or two. Adults are of course happy when saving or making money, and one study suggests that the fare savings, no need for fuel, and other benefits mean that one mile cycled generates 42 American cents to society.

The Dutch are notorious for their love of cycling. In vast contrast to the UK, 32% of all journeys are undertaken by bike in the Netherlands. More cycle paths and safer routes obviously help, and it would be impossible for the UK to reach these levels without significant time and investment into the infrastructure, although a study by CTC estimates that only £10 per person per year is needed to really improve things.

Where this £10 per person per year would come from is a messy debate in itself, but does show that revolutionary funding is not necessary. That £10 could easily be generated by a reduction in health costs as a result of a fitter nation, or reductions in congestion.

Areas with more cycle paths and sustainable transport infrastructure have higher house prices. In fact, the Cabinet Office Strategy Unit has calculated that the costs of transport harm in urban areas are between £38-49 billion a year. Reducing these by enabling people to cycle creates an economic benefit on both a personal and a society level is one that is more likely to be long-lasting and sustained, as everyone feels like a winner.

Health benefits are key, and don’t need explaining in great detail here. Exercise and a balanced diet enable you to live longer – the ultimate in sustainability. One of the great things about cycling as exercise is how it can be combined with a commute, be it to work or the local shops, boosting health at the same as productivity. Fewer fossil fuels in the atmosphere means healthier lungs, and more miles cycled means toned legs – again, benefits all around.

Discussions have taken place between the government and various lobby groups and organisations regarding the improvement of facilities and access. Whether anything comes of these talks is one thing, but thankfully Norman Baker, the transport under-secretary responsible for cycling, has recognised that cycling is “good for environment, good for the economy and good for people’s health”.

If we keep cycling about smiling, and the people at the top recognise the vast benefits of it, we may just be able make our transport system more sustainable in the long-term.