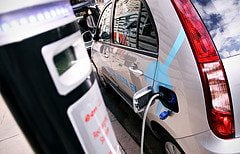 Electric car sales have risen by 25% in the third quarter of 2013, according to new figures. Over 1,100 people signed up for the government’s £5,000 plug-in car grant, the highest number since the scheme was introduced.

The news came as the retailer IKEA announced that all of its UK stores will have electric vehicle (EV) chargepoints installed by the end of the year.

The company, working with leading car manufacturers Nissan and green energy provider Ecotricity, is to provide free, green electricity to customers at 18 stores. It said that the chargepoints will be able to charge EV batteries by 80% within 30 minutes.

“At IKEA we believe electric vehicles have a significant part to play in a more sustainable future”, said Joanna Yarrow, head of sustainability for IKEA UK and Ireland, in a statement.

“We know that our customers want to live more sustainably and that extends to how they get to and from our stores. By installing more charging points and strengthening the infrastructure nationally, we believe we can start to tackle one of the major barriers to using electric cars, which is the fear of not finding a convenient place to charge the car.”

The collaboration is only the latest for Ecotricity, which recently announced it would be working with car manufacturers Volkswagen to offer 100% renewable electricity to all owners of an EV from the Volkswagen and Audi ranges.

One of the main criticisms of EV use is that the cars often depend on electricity generated by conventional means. In the UK, gas and coal-fired power plants still account for the majority of the electricity supply.

However, under the new deal, any customer purchasing an electric vehicle from one of the Volkswagen Group’s brands will be offered, at point of sale, the option to adopt Ecotricity’s 100% green tariff for their home and vehicle power supplies.

Ecotricity founder Dale Vince said, “Running a car on green electricity from the wind and the sun is the last piece of the jigsaw; it’s the ultimate in green motoring.

Research published in July predicts that sales of EVs will rise by more than 200% by the end of the decade.