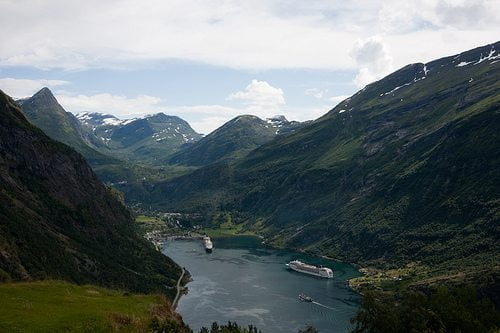 The Fjords of Norway are a collection of unique, stunning and diverse natural landscapes, from mountains to waterfalls. Its Viking heritage can be experienced through active holidays and national designated wildlife routes.

Situated in the western part of the country, the Norwegian Fjords are broken down into four main counties: Rogaland, Sogn and Fjordane, Hordaland and Møre and Romsdal.

One of Norway’s most popular, natural and iconic tourist attractions, the Pulpit Rock (Preikestolen) is located in the Rogaland region. It draws in excess of 150,000 visitors each year, who hike up to the top of the steep cliff. In Rogaland, you can find Norway’s fourth largest city of Stavanger, which in 2008 was selected as a European Capital of Culture, alongside Liverpool. It offers visitors the thrill of magnificent scenery and exciting culinary and cultural experiences – represented in the form of industrial museums and festivals.

Its rapid surge in growth over the last century is due to production of and an overreliance on fossil fuels. The city is widely considered to be the centre of Norway’s offshore oil, gas and energy industries. Multinational companies such as Statoil, its largest oil company, operate from their headquarters in Stavanger.

However, with regards to the nation’s renewable energy drive and sustainable transport transition, Norway was ranked in the top three countries to deliver secure, accessible and sustainable energy in a 2013 index report. Also, Norway is experiencing an electric car boom, with electric vehicles outselling conventional cars.

In the county of Hordaland you will find Norway’s second city, Bergen. Here, you will be able to uncover the historic harbour district of Bryggen. It is a listed UNESCO World Heritage site and one of north Europe’s oldest port trading towns. In addition, it played a prominent role during the medieval period as part of the Hanseatic League. Over centuries many of the distinctive urban wooden structures in the port were damaged and destroyed by fires. Now only 58 timber buildings remain – which have all been preserved, excavated and restored to their former glory.

Railways make the beautiful landscape of the Fjords of Norway readily accessible. On the Bergen Railway you can travel from the capital Oslo to Bergen across unforgettable scenery, mountains terrain, and one of the largest wilderness areas in Europe – the Hardanger plateau. Opened in 1909, it is the highest railway line in Northern Europe of which the highest point on the line is Finse.

Similarly, the Flam Railway is another family favourite line. Opened in 1940, it transported over 600,000 passengers in 2011 and the route runs from the mountain station of Myrdal down to Flam station in Aurland. The Flam Railway is one of the world’s steepest railway lines, this fantastic ride will take you to some of the most breathtaking places, mountains and waterfalls in Scandinavia and Europe. Furthermore, it was voted in the top 10 list of the most beautiful railway train journeys in Europe by National Geographic Traveller Magazine.

If you require more detailed information on the hiking and trekking possibilities in the region, then the Norwegian Trekking Association is a sensible place to start. They offer extensive marked areas of hiking and cross-country skiing trails, group guide tours like glacier hiking and a broad network of cabins, where you can hike from cabin to cabin if you wish.

In terms of developing as a sustainable holiday destination, the Fjords of Norway were selected as part of the early adopters of the Global Sustainable Tourism Council’s (GSTC) Criteria for Destinations. Regional and national authorities have assembled long-term adventure travel destination plans with a necessary focus on sustainability and sustainable tourism.

The Fjords of Norway are continually working towards environmental sustainability, placing an enhanced focus on sustainable tourism, and showing progression in sustainable forms of tourism like geotourism. Ultimately, to become a market leading destination in adventure travel they must apply strict environmental regulations and protection to its most vulnerable wildlife, expand its sustainable practices, and meet environmental demands for its nature to survive.