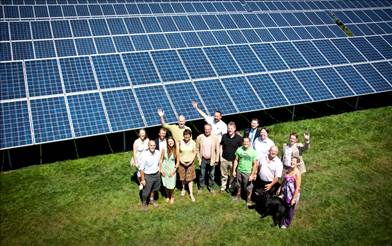 An inspirational story from a sustainable Cornish town

In the wilds of North Cornwall, a small town called Wadebridge has picked up on the Government’s lax attitude to sustainability and taken matters into its own hands. Anna Duggal reports.

WREN, the Wadebridge Renewable Energy Network, is a group of over 550 voting members, whose aim is to produce 30% of the town’s energy from renewable sources by 2015. One year in, and the project is well on target, according to co-founder Stephen Frankel.

In the wilds of North Cornwall, a small town called Wadebridge has picked up on the Government’s lax attitude to sustainability and taken matters into its own hands. Anna Duggal reports.

WREN, the Wadebridge Renewable Energy Network, is a group of over 550 voting members, whose aim is to produce 30% of the town’s energy from renewable sources by 2015. One year in, and the project is well on target, according to co-founder Stephen Frankel.

Frankel says that the idea for WREN arose from “continuing bewilderment that so little was being done to implement climate or renewable targets”.

The website highlights this further, especially in terms of the importance of tackling climate change as a group:

“By approaching reduced carbon emissions and renewable energy use as a whole town, rather than individually, substantial reductions can be made in the cost of implementation with the added bonus that it can produce further benefits for the community at large.”

The group was launched in January 2011 when initial ideas focused on the installation of solar panels not only on houses but also on industrial roofs, wind turbines and greenfield sites, which could produce income for the town instead of outside industries.

Asked about how this had developed, Frankel claimed, “Solar PV is the simplest technology to implement, [and] over one megawatt (MW) has been installed in the area. We are developing big wind, anaerobic digestion and tidal energy programmes, but these are more complex so take more time.”

Other projects, Frankel says, include, “a system of real-time energy monitoring (WRENGAGE) whereby people are part of a community experience of energy monitoring. This is necessary as ‘behaviour change’ tends not to occur when people are dealing with such issues in isolation.

“The rest of the programme is working on bringing high-value employment prospects in the low carbon sector – the WREN EcoPark. And this has the support of the Chamber of Commerce and Business community.”

WREN has already picked up some pretty high profile outside support, too. At the opening of its high street ‘Energy Shop’, Tim Smit, the founder of the Eden Project, was in attendance, a positive sign that the collective is moving in the right direction.

WREN has also been shortlisted to host an electric car club this summer with the E-Car Club, and will install free smart meters in homes, which can reduce energy usage by up to 15%. The increasing number of sustainable projects that WREN is involved in has led to it being awarded winner of the South West Green Energy Award 2011.

Looking at the wider picture of the UK’s renewable energy targets, Frankel concludes that we must “take them seriously and allow decentralisation of the energy economy. Only an actively engaged population can create the changes that are required.”

WREN certainly isn’t the only project supporting sustainable neighbourhoods in the UK.

In fact, a government-funded eco-town programme was proposed back in 2007 to offer an opportunity for high standards of sustainable living and affordable housing in 10 towns throughout the UK. But when the Conservative-Liberal Democrat coalition came into government in 2010, the plans were put on hold.

In April 2011, it was announced that only one of the proposed sites, Northwest Bicester in Oxfordshire, would actually be constructed to the originally proposed standards. That is to say, zero-carbon developments that are exemplary in at least one area of sustainability, such as energy production or waste disposal.

Blue & Green Tomorrow recognises that the continued adoption of renewable energy is essential in creating a sustainable future. This widely appreciated view is outlined in a recently published in-depth report, The Rise of Renewable Energy.

If you’ve been inspired by the WREN project, you can always switch to renewable energy for your own home or business. Get in touch with Good Energy, who will help you through the process.

Harnessing the power of the community