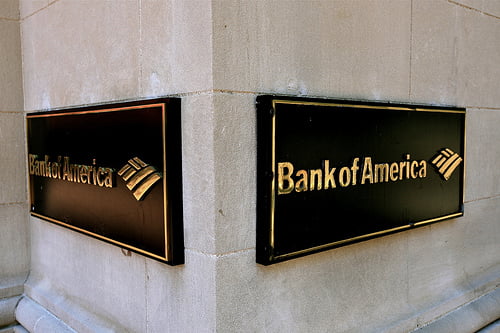 Bank of America pledges $50 billion worth of sustainable investments

The Bank of America has unveiled a $50 billion (£32 billion), ten-year business strategy to finance environmental and sustainable projects in an attempt to help achieve a low-carbon economy.

The programme, which begins in January 2013, will build on the triumphs of the £20 billion environmental business initiative that has already been in place for ten years. The bank says the current programme is “more than four years ahead of schedule” as it nears the end of its existence.

The encouraging announcement sees the Bank of America follow in the footsteps of competitors Goldman Sachs and Morgan Stanley – both of which have announced sustainable shifts in their investment strategies in the last two months.

“Environmental business delivers value to our clients, return for our shareholders, and helps strengthen the economy”, said Bank of America CEO, Brian Moynihan.

“We met our prior goal in about half the time we set for ourselves, so more than doubling our target is ambitious but achievable.”

The bank’s seemingly greater focus on sustainable investments and environmental projects has fetched industry praise, too, having been shortlisted in the sustainable global bank of the year category at this evening’s FT/IFC Sustainable Finance Awards.

Its new initiative will focus on investing in four key areas: energy efficiency, renewable energy and energy infrastructure, transportation and water and waste.

At the end of March, the Bank of America’s current programme had contributed $17.9 billion (£11.5 billion) of its $20 billion (£12.8 billion) total – 47% of which was put towards energy efficiency and 28% towards renewable projects.

And it’s not just the environmental impact of its investments that the bank is addressing. It has also set a number of internal targets to be met by 2015, including a 25% reduction in energy consumption over 2004 levels, as well as 20% reductions in paper and water usage over 2010.

This, as well as the $50 billion environmental business programme, will go some way to diverting the organisation away from unsustainable fossil fuels – an industry that it has publicly funded in the past.

A study in November last year placed the Bank of America third in the top 20 “climate killer” banks, after it was revealed to have put over €12.5 billion (£10.1 billion) into the coal industry alone since 2005.

However, as with Goldman Sachs’ clean energy investment plan last month, the scale of funding available to the multinational banks is so vast – it currently has $2.1 trillion worth of assets under management – that even $50 billion over ten years is relatively small change.

Investment into renewable energy worldwide topped $257 billion (£165 billion) last year, according to two recent reports. The Bank of America, Goldman Sachs, and indeed, all multinational banks, could invest this figure into the sector on their own a few times over.

And as renewables become an even more attractive investment opportunity in the shift towards a sustainable, low-carbon economy, it’s hoped and expected that this figure will soar.