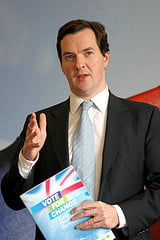 In his budget speech, George Osborne announced that the Government will be fiscally neutral, called personal tax avoidance “morally repugnant”, and highlighted the “crucial” role to be played by renewable energy.

But it took the chancellor 21 minutes to mention anything even remotely environmental or green. And, after the wait, his much-anticipated statement ultimately disappointed us here at B&GT.

In his budget speech, George Osborne announced that the Government will be fiscally neutral, called personal tax avoidance “morally repugnant”, and highlighted the “crucial” role to be played by renewable energy.

But it took the chancellor 21 minutes to mention anything even remotely environmental or green. And, after the wait, his much-anticipated statement ultimately disappointed us here at B&GT.

The “Green Measures” section on the BBC website speaks volumes about Osborne’s priority in its brevity:

“Government to seek “major savings” in the administrative cost of the Carbon Reduction Commitment, and bring forward an alternative environment tax this autumn if such savings cannot be found.”

However, renewable energy did get a quick mention. “Renewable energy will play a crucial part in Britain’s energy mix”, said Osborne, but failed to go into specifics.

In fact, the word ‘renewable’ (and variations thereof) appeared just twice in the whole hour-long address. ‘Sustainable’ and ‘environment’ cropped up three times, whilst ‘green’ was included on only one single occasion – during the solitary mention of the Green Investment Bank, which incidentally opens for business next month.

There was absolutely no mention of ‘climate change’ so many of us will be left thinking, “what about the environment?”

We’re not sure if we are pleased or scared that Osborne and didn’t even try any greenwashing tactics. He simply glossed over the issue and moved on. “Environmentally sustainable has to be fiscally sustainable too”, said the chancellor. But what Osborne may be forgetting is the sentiment so frankly put Ben Goldsmith: “There’s no business to be done on a dead planet”.

Sadly, the 2012 budget had a much stronger focus on fossil fuels.

“Gas is cheap, has much less carbon than coal and will be the largest single source of our electricity in the coming years”, said Osborne.

“And so the Energy Secretary will set out our new gas generation strategy in the autumn to secure investment.

“I also want to that ensure we extract the greatest possible amount of oil and gas from our reserves in the North Sea.”

This doesn’t sound like the “greenest government ever” to us. To amplify the matter, Osborne announced that some £3 billion – the same amount given to fund the GIB – would be put towards the oil and gas industries.

Yet, the move could work in the renewable energy industry’s favour. As political consultant, Jessica Lennard, tweeted, the unjustifiable financing and strong favouritism towards the dirty energy sectors makes it extremely difficult for renewable energy opponents to criticise on grounds of subsidy.

Planning reforms were also on the agenda. Next week, the Government will publish the 50-page results of its National Planning Policy Framework (NPPF) – described by the chancellor as “the biggest reduction in business red tape ever undertaken”. This is worrying.

He added, “We’re introducing a presumption in favour of sustainable development; while protecting our most precious environments”. Environmentalists may be left scratching their heads about the weight of that statement.

There were some hidden gems among the pages of the full budget report though. Penny Shepherd, chief executive of UK Sustainable Investment and Finance (UKSIF), spoke with B&GT and said, “The budget signals real government support for social impact investing”.

Drawing our attention to a section on Community Investment Tax Relief (CITR), Shepherd believes that relaxation of on-lending requirements from April 2013 will address long-standing concerns that have inhibited use of this social investment tax break in the past.

She also welcomes HM Treasury plans to conduct an internal review looking into the financial barriers to social enterprise, and notes the “potential for responsible investment in social housing“, specifically, plans to consult on the role that Real Estate Investment Trusts (REITs) could play in supporting the social housing sector.

Overall, Osborne’s speech ignores what should be a key governmental strategy: addressing climate change and securing our national grid by reducing our reliance on fossil fuels. Renewable energy needs to be the backbone of our economy, not a side-project.

Private investors have the power to raise the profile of the sector. Ask your IFA how you can invest in sustainable funds or fill in our online form and we’ll help you down the right path.

Alternatively, take a look at Good Energy – the UK’s only 100% renewable electricity provider – for more information and some pricing that might surprise you.

For a more in-depth look into yesterday’s budget, our founder Simon Leadbetter provides deeper insight and explains what it all really means. Read the article here.

Looking ahead and around