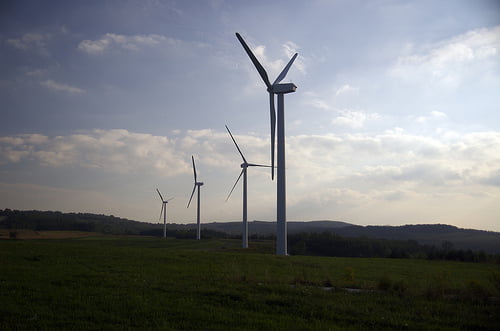 An innovative new funding model, Abundance Generation, has taken its first steps to investing £250m in renewable energy in the next five years, after it launched a wind project in the Forest of Dean.

The 500 kilowatt (kW) development is hoping to attract £1.4m by the end of September this year, but for individuals that are put off by the scale of these sums, Abundance offers a refreshing way of investing.

People can put as little as £5 towards projects if they wish, with the maximum pledge being £50,000. Returns vary between 6.75-8%, and one thing’s for sure; all the money that is put forward by investors goes directly into the projects themselves, funding growth and revenue in the real economy.

“Our mission is to create a renewables revolution by giving people the opportunity to invest in renewables projects – whether they have £5 or £50,000 – and enjoy a good regular return.

“We know today’s investors want more control over where their money is going and how it’s being used.”

This first project, developed in partnership with Resilient Energy Great Dunkilns (REGD), is the foundational stride forward by Abundance in its attempt to revolutionise the UK’s energy markets.

Having only been open for investment for around a week, it has already raised £100,000, with the age of investors ranging from 20 to 80.

“There’s a massive gap in the funding of renewable energy”, he said.

“The current well-intentioned, individually organised projects are good as far as they go, but are relatively inefficient and can’t scale up quickly enough to meet the need.

“By bringing together lots of investors, Abundance can attract levels of funding needed to build large-scale projects costing tens of millions of pounds.”

Two recent reports, by the United Nations Environmental Programme and the Renewable Energy Policy Network for the 21st Century, say that investment in renewable energy reached a record high globally last year, with $257 billion (£165 billion) pumped into the sector – six times the amount invested in 2004.

Another study, this time by Bloomberg New Energy Finance in December last year, described how the trillionth dollar had been invested in the clean energy sector – surpassing investment in fossil fuels at the same time.

Blue & Green Tomorrow’s recent Guide to Limitless Clean Energy explores the idea of community renewable energy ownership through the words of Adam Twine, founder of the wind and solar co-operatives at Westmill.

The Westmill Solar Co-operative, incidentally, has itself witnessed great progress of late, having raised half of its £4m target in just over three weeks. And the power of community-owned-and-generated energy is a thoroughly exciting prospect, and one that should not be overlooked.