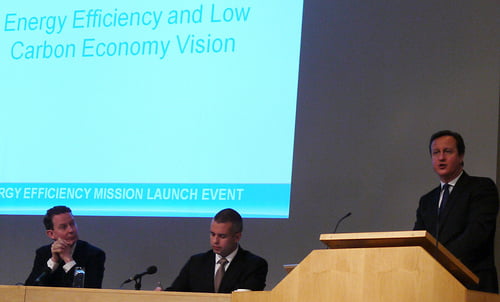 David Cameron has outlined that the UK must be doing what is right for both the planet and the economy, in one of his most promising green speeches as prime minister.

The speech, which has been republished here in full by BusinessGreen, marked the launch of the Department of Energy and Climate Change’s (DECC) energy efficiency mission.

Cameron said, “Far from being a drag on growth, making our energy sources more sustainable, our energy consumption more efficient, and our economy more resilient to energy price shocks – those things are a vital part of the growth and wealth that we need.”

He added that the UK was already leading the way on green energy, green investment and green jobs, and went on to laud some of the coalition’s environmental achievements, including the green deal and the Green Investment Bank.

“I think there’s a huge opportunity”, Cameron went on.

“If you look at all the individual things I have mentioned that the government has committed itself to, the whole is much greater than the sum of any one.

“I want to bring these together and really explain to the world, and particularly investors, what is available here in Britain.”

The prime minister’s address was arguably his strongest green speech since he came into power in 2010. He had one planned in April last year but decided to reduce it to mere remarks – and today urged people to “judge a government on what it does, rather than the frequency of speeches”.

It will be largely welcomed by green businesses – and particularly investors whose interest in the UK green economy could easily have waned following an uncertain few months within parliament.

Labour leader Ed Miliband and Conservative MP Zac Goldsmith are two of a number of MPs who last year said that potential investors could go elsewhere if the squabbling, uncertainty and instability continued.

We called recently for a credible green innovation growth strategy and Cameron’s speech today is a positive step in the right direction.