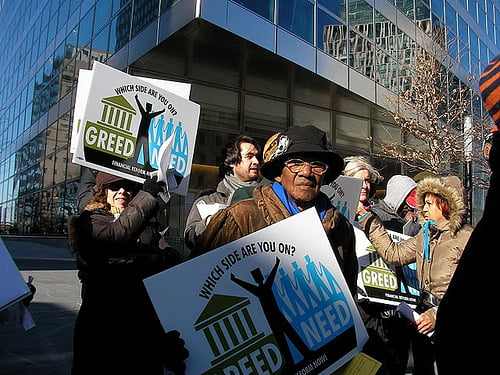 Former Goldman Sachs director Greg Smith has given his first interview after writing a damning article in the New York Times in March about the “toxic and destructive” environment that forced him to quit his job.

Speaking with the Associated Press ahead of the publication of his book, Why I left Goldman Sachs, Smith said that investment banking on Wall Street “ultimately affects everyone”, and that it isn’t “just rich people gambling with other rich people’s money”.

Smith’s controversial op-ed, in which he laments his former employer’s ruthless drive for profits – an approach that he says will force clients to lose trust, caused uproar in financial circles when it was published on March 14.

Its effect rippled through the multinational bank, which was reported to have lost in excess of $2.15 billion of its market value as a direct result of Smith’s article.

Using products from a random selection of Goldman’s top holdings, including Apple, Microsoft and Pfizer, Blue & Green Tomorrow worked out how many items each of the 16 paragraphs, 1,278 words, or 5,754 characters, would be able to purchase, and displayed this as an infographic. (Click below to enlarge). 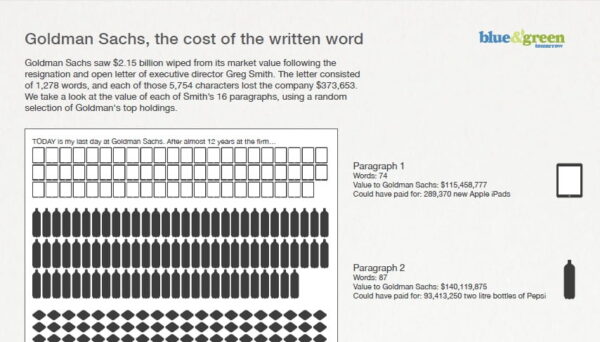 Goldman Sachs, the cost of the written word (Click to enlarge).

Smith told the Associated Press that Goldman has since brushed off all his claims, despite him receiving countless text messages and emails from clients saying they agree with his stance.

“The thing that disappoints me most is that management is denying there’s a problem”, Smith explained.

“Why not try to repair the trust instead? Clients are telling you they don’t trust you.”

He added that evidence of unethical behaviour is displayed perfectly by the fraud case against Goldman from the Securities and Exchange Commission (SEC), which accused the bank of selling dodgy investments and forced it to pay $550m in fines – the biggest SEC punishment in Wall Street history.

“Right now the system is stacked against everyone else in favour of the banks”, continued Smith.

“It’s a little like a casino. A real casino is regulated and there are cameras everywhere and the casino cannot see your cards.

“With Wall Street today, the bank can see what every government, every pension fund, every hedge fund in the world is doing. They can effectively see everyone’s cards.

“Then, instead of facilitating the client’s will, they’re trying to get the client to facilitate their will.”

Sadly, this behaviour is not exclusive to Goldman Sachs. The cutthroat world of mainstream financial services displays similarly unethical traits across the board – an unsustainable and irresponsible direction to progress in.

B&GT’s recent Guide to Sustainable Banking explored the best, ethical, sustainable and responsible banking alternatives in the UK – none of which are steeped in shady transactions and profit-centred motives.