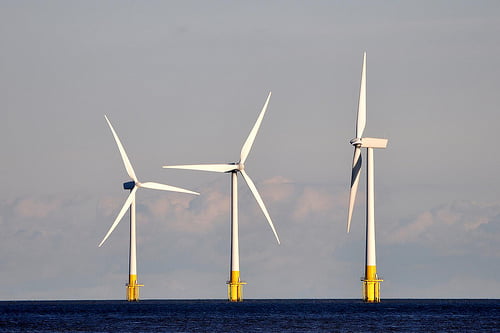 Centrica, DONG Energy and Siemens have finalised a deal to provide an under-construction 270 megawatt (MW) North Sea wind farm with £425m of financing.

Since 2010, the trio have overseen construction of the farm off the coast of Skegness in Lincolnshire, which is expected to be completed next year.

A consortium of 10 banks, including Santander, Lloyds TSB and HSBC, has agreed to join the finance side of the project, and will contribute significantly to the £425m sum.

They will be doing this through something called non-resource finance, which Investopedia describes as, “A loan where the lending bank is only entitled to repayment from the profits of the project the loan is funding, not from other assets of the borrower.”

The development of offshore wind is a growing trend in the UK. A recent Blue & Green Tomorrow infographic showed that capacity had increased by 93% between 2010 and 2011, whilst generation of power increased by 181%. This places the energy source second behind solar in the fastest-growing renewable technologies list.

It’s clear that energy suppliers are seeing it as an increasingly prosperous opportunity. And rightly so: harnessing around 29% of our offshore wind capabilities would meet all of the UK’s energy demand.

A number of cities across the country, including Hull, have also realised the potential lucrativeness in pushing forward the sector, with many ports now heavily involved in the manufacturing, importing and exporting sides of the industry.

But wind has had its fair share of opposition in recent months, too. US billionaire tycoon, Donald Trump, has led a public fight against the development of an offshore wind farm in Scotland, whilst National Trust chairman Sir Simon Jenkins took a swipe at the wind industry more generally back in February.

The Lincs wind farm will house 75 turbines, and is expected to cost at least £725m. Once completed, it’s expected to power some 200,000 homes – a vital step forward in securing a sustainable energy mix in the future.