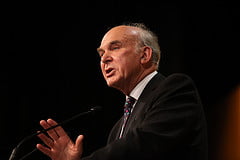 The location of the Green Investment Bank (GIB) is set. The Government completely ignored Blue & Green Tomorrow’s recommendation of Nottingham, and instead, went down the well-trodden path of predictability and cowardice.

London and Edinburgh have been picked out by Vince Cable and co. as hosts of the GIB, with the headquarters located in Scotland, and the main transaction team in England.

The location of the Green Investment Bank (GIB) is set. The Government completely ignored Blue & Green Tomorrow’s recommendation of Nottingham, and instead, went down the well-trodden path of predictability and cowardice.

London and Edinburgh have been picked out by Vince Cable and co. as hosts of the GIB, with the headquarters located in Scotland, and the main transaction team in England.

Cable announced the decision on Thursday, March 8, stating, “Harnessing the strengths of Edinburgh and London will support the GIB’s ambition to become a world leader.

“Edinburgh has a thriving green sector and respected expertise in areas such as asset management.

“London, as the world’s leading financial centre, will ensure that the GIB’s transaction team can hit the ground running.”

The pair were picked from a group of 32 bidding cities – a list that included the likes of Leeds, Manchester, Hull and Leicester.

Surely, the decision – which arguably selected the two most predictable options from the 32 – is undermining the whole ethos of the £3 billion scheme.

In its drive towards a low-carbon or green economy, opting for two already-established financial hubs seems tiresome. The GIB should be about growth in places that need growth. Have we learnt nothing from the financial crisis?

To that end, in February, we decided to present our recommendation for the GIB using a number of critical criteria in a competition that can only be described as an FA Cup –X-Factor hybrid in excitement terms.

After five rounds of deep deliberation, we deemed Nottingham to be the most appropriate host city. The East Midlands city successfully sailed through scrutiny of its carbon levels, financial services sector, higher education institutions, and economic development, before being pitted in a head-to-head battle with Brighton, where after investigation into each city’s transport links, it was eventually chosen as the winner.

The Government’s thought process in choosing Edinburgh as the headquarters is somewhat bizarre. Not only because it already boasts the UK’s second largest economy, but also because of the increasing likelihood that Scotland will eventually achieve independence.

Questions are bound to be raised over the fact that the GIB will have a London office as a supplement to its Edinburgh HQ in that event. But did politics sway the final decision? Apparently not, according to Mike Crockart, the Lib Dem MP for Edinburgh West in The Guardian.

Despite these concerns, the decision has received widespread support from the industry.

Chair of UKSIF, Martin Clarke, said it “welcomes this important step”, whilst Friends of the Earth Scotland’s chief executive, Stan Blackley, said Edinburgh “was always the natural and logical location for the GIB given its unique combination of renewable energy and financial infrastructure and expertise”.

Julian Parrott, partner at Ethical Futures, a group of independent financial advisers based in Edinburgh, commented on the “surprising” but “excellent” news, saying he thought “the independence issue might go against us.

“The decision is sensible. Edinburgh is the UK’s second financial centre and Scotland, by dint of geography, is where a lot of the renewable resource is and where many of the new businesses are based.”

On the subject of whether or not Scotland’s independence drive will be affected by the decision, Parrott added, “The cynic would say it is an additional case for keeping the union (i.e., we might lose it), the nationalist or optimist would say that it’s a great opportunity for proving that Scotland is the natural centre for developing green business.”

With the GIB came a chance to not only push the UK towards a greener economy, but also to expand its business and financial centres away from the current leaders – namely, London and Edinburgh.

Instead, in its choice, the Government has succumbed to predictability, which is a shame. Although the GIB will no doubt have a positive impact on the UK economy, the effect it could have had – in building new financial hubs, creating jobs, and forming an additional knowledge base away from the usual suspects – is now but a sad and distant memory.

All is not lost, though. This poor decision doesn’t change the fact that sustainable investment is still imperative in order to realise the green economy. Ask your financial adviser about it, or alternatively, fill in our online form. Furthermore, you can back green energy all the way by talking with Good Energy.

The Battle for the Green Investment Bank: The Final