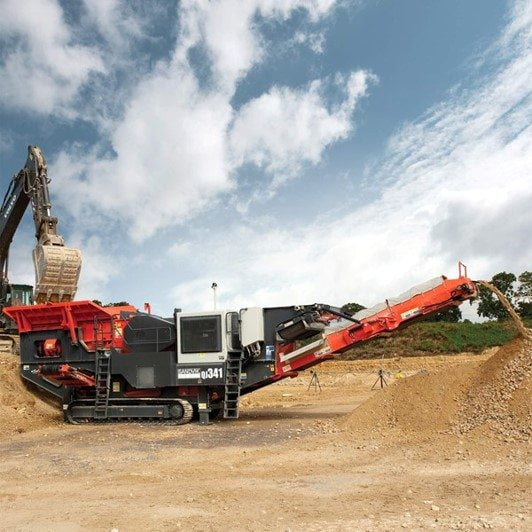 The quarrying and construction industries are well known across the world for the sheer magnitude of the equipment they use. The towering cranes, colossal trucks and enormous mobile jaw crushers used in these industries are so ubiquitous and iconic around the globe that they even come in the form of as children’s toys these days.

The problem here is that these machines guzzle fossil fuels like it’s going out of fashion – if we have any hopes of hitting our global carbon emission targets, we either have to slow down our construction and quarrying efforts or we have to find a greener way of doing the same job.

Fortunately there is an alternative to these diesel powered titans. Recent advancements in the field have led to the development of LNG engines – engines running on liquid natural gas (liquid petroleum gas or LPG in the US). LNG, for the most part, is a basically super-chilled methane which can be used in modified engines. Because LNG is typically 95 per cent methane by volume (it can be as high as 99.72 per cent), LNG mostly produces carbon dioxide and water when burned. Because it doesn’t produce other harmful pollutants, it is considered a clean-burning energy source. Given that LNG usage in electric power plants only produces half as much CO2 as a plant using coal, the environmental impact of the construction and quarrying industries adopting LNG as its primary fuel source is potentially massive.

This is something which many independent construction companies have already realised, partly because of the environmental benefits of reducing carbon emissions and partly because LNG is around 40 per cent cheaper than diesel. This is because of the massive abundance of underground natural gas reserves – the Shell Corporation has estimated that there is more than 230 years’ worth of methane for LNG stored underground, and that LNG could produce 20 percent of our global gas needs by 2020.

As methane such a small molecule – its chemical formula is simply CH4 – engineers and chemists have found it to be extremely versatile. LNG isn’t the only possible application for natural gas in the construction and quarrying industries. All of the enormous machines used in the industry come with moving parts, and moving parts require maintenance. In particular, moving parts need lubricating. Shell have been working on ways to use low density hydrocarbons such as those found in natural gas as lubricant. Because of their small size and low carbon density, these lubricants have an extremely low viscosity, helping improve engine life and fuel economy.

All of this comes as great news if it’s to help turn the quarrying and constructions in a new, lean and green direction. Considering the economic and ecological benefits of turning to LNG, why haven’t more companies adopted natural gas as their primary fuel source? The short answer is because even if the fuel itself is relatively cheap, the tank which holds the fuel can cost up to $35,000. This is because the pressure valves used to contain the fuel are made in fairly small volumes. If you’re wondering how important the pressure valves are, the fuel is stored at a massive 3,600psi before being regulated down to 200psi for ignition.

As more and more companies move towards using LNG as their primary fuel source the price of these tanks will begin to fall as they are mass-produced. As it stands, companies are likely to break-even on this investment in just two and a half years, which is making LNG a more and more attractive fuel for companies around the world. Moving forwards, these industries have massive savings to look forward to, both in terms of the bottom line and the environment.