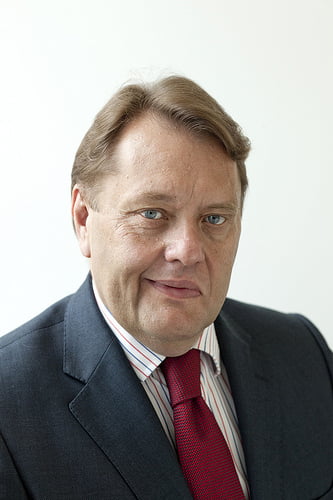 Conservative energy minister John Hayes, who recently received fierce criticism over his unfavourable comments about wind power, is set to speak at a renewables event in Lincolnshire tomorrow. And now is your chance to pose a question to him.

The Lincolnshire showground will play host to a number of business leaders from the county for Green Energy Lincs – a conference that aims to raise awareness of the renewable energy industry.

Hayes, who is MP for South Holland and the Deepings, will deliver a keynote speech and is expected to be quizzed about his own views on renewable energy, as well as on government energy policy more generally.

His appearance at the event comes after fellow Tory MP Zac Goldsmith told Blue & Green Tomorrow that investors could “lose interest” in the UK if the uncertainty around its energy policy continues.

Tory MP Chris Heaton-Harris was secretly recorded seemingly supporting Telegraph blogger James Delingpole’s anti-wind campaign in the Corby by-election. He added that Hayes – who he said was already “on my side” – was “prepared to duff [Lib Dem energy secretary Ed Davey] up” in order to change his views on wind.

Despite being one of the largest and greenest counties in the UK – almost ideal for onshore wind – Lincolnshire county council leader Martin Hill vowed to put a stop to the “unrestrained invasion” of wind turbines in the region in June.

But Green Energy Lincs organisers claim there is huge scope for renewables development in the county – something that the various expert speakers are set to champion.

“However, the industry is fast-moving and rapidly-expanding and requires organisations that are not only fully aware of the opportunity but that also have the capability and capacity to join it.”

“There are some fantastic investment opportunities, for both solar PV and heat-based technologies, and the rates are now better than 18 months ago”, he said.

“It’s essentially because, using PV as an example, it probably costs half as much now than it did 18 months ago to install as the costs of hardware has reduced.

“And while the costs of tariffs have reduced, the price of electricity has increased so the savings are more and the return on investment has increased.”

Other topics on the agenda include how renewables and agriculture can work hand-in-hand, and also how renewable energy can aid businesses.

Blue & Green Tomorrow will be attending the event, and we’re asking our readers to send us questions for John Hayes, who will be undertaking a short Q&A session after his keynote speech.

If you have a question, tweet us at @bluegreentweet or use the hashtag #AskHayes. Alternatively, you can send it via email to editor@blueandgreentomorrow.com. We’ll do our utmost to ask as many as possible.