Charity Bank has been awarded the top spot in The Good Shopping Guide index of ethical banks and building societies for the ninth year in a row, receiving an impressive Ethical Company Index (ECI) score of 100 out of 100.

For the ninth year running Charity Bank has been awarded the top spot in the index of ethical banks and building societies, according to research carried out by The Good Shopping Guide in 2016. Ecology Building Society and Triodos Bank follow in second and third place, whilst many high street banks feature in the least ethical league table.

The Good Shopping Guide’s researchers monitor the ethics of companies across a wide range of sectors from banking to travel and set a benchmark for corporate behaviour. Banks and building societies are rated on their social and environmental performance. The results are equated in league tables to help people make informed decisions about which brands are best for the planet. 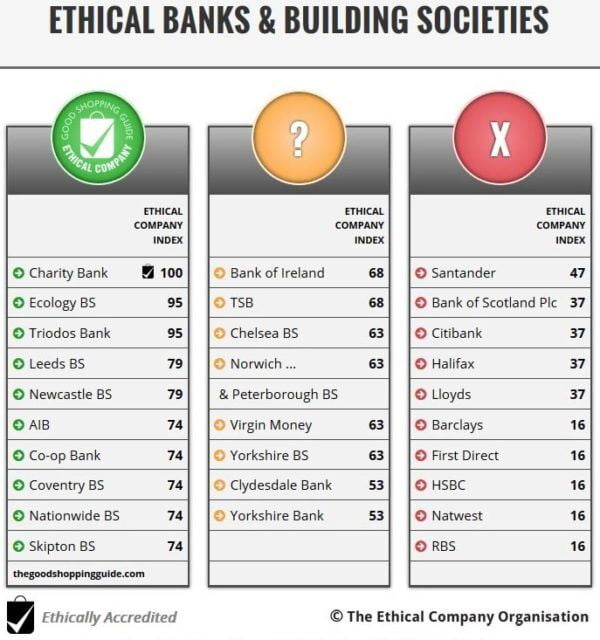 William Sankey, Research and Editorial Director of The Ethical Company Organisation, says: “We would like to congratulate Charity Bank for being re-awarded Ethical Accreditation through our organisation.  The bank has attained continuous accreditation for the last nine years.  In that time, Charity Bank has consistently received a high-ranking Ethical Company Index (ECI) score of 100, which reflects the core values of a bank which puts people and planet first.  Charity Bank is one of only 11 companies to achieve an ECI score of 100 within our published research on The Good Shopping Guide, for which they should be commended.”

Patrick Crawford, Chief Executive of Charity Bank, says: “We’re immensely proud to be awarded the top spot in The Good Shopping Guide index of ethical banks for the ninth successive year. There’s a serious point here: the value of banking can change. And it starts with banks considering social and environmental values as core to their business.

“We aim to show this by example. We’re a bank entirely owned by charitable and social purpose organisations. We’re a bank that doesn’t pay bonuses. We use the money our savers entrust to us to make loans to charities and social enterprises. In short, we’re a bank for people who don’t just dream of a better world, but are busy building one.”