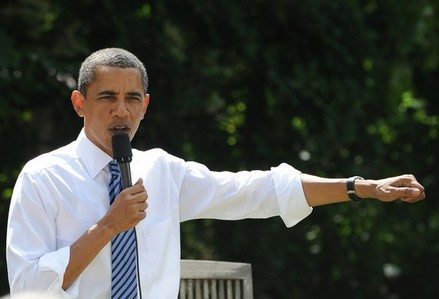 Barack Obama has said that those who deny climate change are not only ignoring the science but also missing the opportunities that the threat presents, including job creation, innovation and leading the way towards a low-carbon world.

Speaking to graduates at the University of California, Irvine, the US president said that students were facing more than one great challenge and one of these was “the growing threat of a rapidly changing climate”.

He compared denying climate change to those who say the moon is made of cheese, quoting some challenges faced by former president John F Kennedy when preparing to send the first man to the moon.

“But nobody ignored the science. I don’t remember anybody saying that the moon wasn’t there or that it was made of cheese”, Obama said.

“The climate change deniers suggest there’s still a debate over the science. There is not. The talking heads on cable news suggest public opinion is hopelessly deadlocked. It is not. Seven in 10 Americans say global warming is a serious problem.”

He then said that America made great progress in reducing emissions and pollution, the latest of which was announced recently. Obama revealed earlier this month new measures to cut carbon pollution by 30% by 2030.

“There’s a reason that more than 700 businesses like Apple and Microsoft, and GM and Nike, Intel, Starbucks have declared that ‘tackling climate change is one of America’s greatest economic opportunities in the 21st century’. The country that seizes this opportunity first will lead the way. A low-carbon, clean energy economy can be an engine for growth and jobs for decades to come, and I want America to build that engine”, Obama said.

“You need to invest in what helps, and divest from what harms. And you’ve got to remind everyone who represents you, at every level of government, that doing something about climate change is a prerequisite for your vote.”