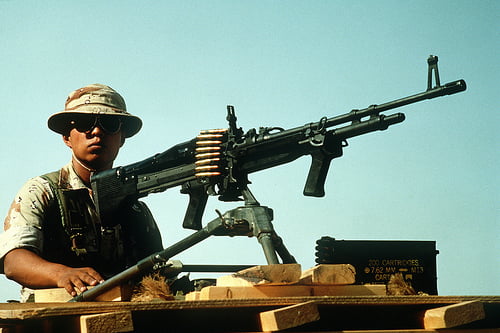 The prime minister David Cameron is in Dubai in a bid to reinforce defence relationships with a number of Arab states. But questions have arisen regarding Britain’s role in selling arms to oppressive regimes.

Sources claim that the prime minister is hoping to seal a deal to sell more than 100 Eurofighter Typhoon jets to a number of governments in the Middle East for the princely sum of £6 billion.

However, selling arms to foreign nations – particularly those with civil unrest or in the middle of conflict – is seen as deplorable by campaigning organisations.

The Campaign Against Arms Trade (CAAT) is a UK organisation that “works to end the international arms trade”. According to CAAT, Brunei is the top buyer of UK arms in the world, with the US, India, Italy and France making up the top five.

Of the Middle Eastern nations in the top 10, Saudi Arabia is sixth, Qatar is ninth and Bahrain is 10th. Bahrain’s inclusion in a rundown of the top buyers of UK arms comes at a time when the country is seeing a series of protests taking place – so much so that it had to call a state of emergency.

Dozens of people – civilians included – have been killed since the unrest began in February last year.

“David Cameron says he is in favour of human rights, but is undermining this by promoting arms sales to the authoritarian regimes of Saudi Arabia and the United Arab Emirates”, said Ann Feltham, parliamentary co-ordinator at CAAT.

“He justifies it on employment grounds. However, the skills of many arms industry workers are just those needed for a viable renewable energy industry.

“The government must switch its support and subsidies to the latter.”

Figures released by CAAT claim that 55,000 people are employed by the arms exporting industry in the UK – 0.2% of the workforce.

Speaking to the parliamentary defence committee in September 2010, Dr Sandy Wilson, president of General Dynamics and vice-president responsible for defence at trade association ADS, said, “The skills that might be divested of a reducing defence industry do not just sit there waiting to come back. They will be mopped up by other industries that need such skills.

“We are talking about high-level systems engineering skills, which are often described as hen’s teeth. It is an area in which the country generally needs to invest more.

“You can think of the upsurge in nuclear and alternative energy as being two areas that would mop up those people almost immediately. Then the question would be not of choice, but of them just not being there.”

It is totally understandable to invest in defence and arms that serve to protect your own country. It’d be questionable if a government didn’t do so. However, exporting billions of pounds worth of arms to nations under oppressive regimes or unstable societies is unethical and unwise.

But ethics appear at a premium in the UK’s defence sector, which would probably sell gunpowder to Guy Fawkes if the price was right.