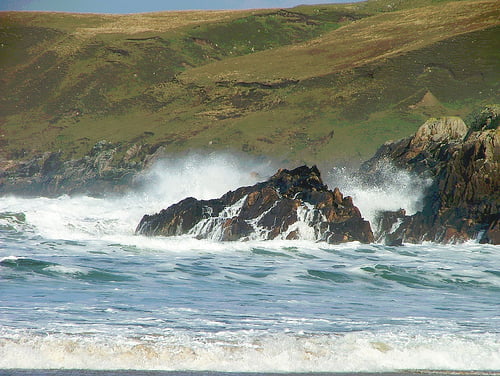 A new marine energy fund to help develop Scotland’s first commercially viable wave and tidal systems was announced by first minister Alex Salmond on the opening day of the All Energy 2012 Exhibition and Conference in Aberdeen last week.

The £18 million Marine Renewables Commercialisation Fund (MRCF) forms part of the £35 million committed by the Scottish government and its enterprise agencies to specifically support the development of demonstrator wave and tidal power schemes up to commercialisation over the next three years.

The new fund – which is to be steered by the Carbon Trust – was one of the many boosts for Scotland’s burgeoning renewables industry unveiled at the event, and is now open for bids from marine energy developers.

Scotland has a world leading resource and is a hot bed of innovation and deployment making marine energy an exciting green growth sector.

In his address to industry delegates, Salmond also announced a new research centre devoted to the development of carbon capture technology, which experts claim will be the key to unlocking the recovery of £190 billion worth of North Sea oil.

He also announced the first award from the £70 million National Renewables Infrastructure Fund (NRIF) – a £500,000 grant to transform a strategic dock near Glasgow in to a key manufacturing location for renewable energy.

The MRCF comes in addition to a sum of money from the £103 million Renewable Energy Investment Fund, as well as the Wave and Tidal Energy: Research, Development and Demonstration Support (WATERS) funding which is aimed at further developing the testing of new wave and tidal prototypes in Scottish seas.

The first minister said, “The new fund brings together the marine renewables expertise of the Carbon Trust, Scottish government and our enterprise agencies.

“It will help move the wave and tidal sector from prototype devices to commercially-viable arrays, producing increasing amounts of electricity solely from the power of the seas and deliver a lasting legacy for future generations.

And Dr Stephen Wyatt, head of technology acceleration at the Carbon Trust, added, “Scotland has a world leading resource and is a hot bed of innovation and deployment making marine energy an exciting green growth sector.

“This new fund will be critical to tackle the next set of challenges and innovate to drive down costs of both wave and tidal power.”

Indeed, the new fund reflects the government’s push to maintain Scotland’s position at the forefront wave and tidal development, keeping the nation at the centre for global investment in marine technology.

With 11,800km of coastline, 10% of Europe’s wave and tidal energy resources and 25% of Europe’s tidal stream potential, it is only natural that the SNP government continue to support the development of marine power through funds like the MRCF.

Moreover, bolstering the wave and tidal energy sectors will be intrinsic to Scotland’s renewables revolution under Alex Salmond – whose SNP government remains committed to generating the equivalent of one-hundred per cent of Scotland’s electricity consumption from renewables by 2020.

The European Marine Energy Centre (EMEC) in Orkney is one existing physical demonstration of Scotland’s power in the marine energy sector.  It is the first centre of its kind to be developed anywhere in the world, offering developers the chance to test full-scale grid connected prototype wave and tidal devices in unrivalled turbulent seas.

Research across wave and tidal project sites is also conducted in order to ensure that the marine environment is preserved while wave and tidal devices are deployed for testing.

The MRCF will help support many of the projects at the EMEC by bringing devices up to commercialisation that have already been demonstrated at the full-scale prototype stage.

Indeed, Scotland’s marine energy sector is at an exciting stage of development today, with the machines harnessing wave and tidal power more efficiently than ever before. This means that large scale utility companies and industry leaders are starting to see how the technology is developing, and that cost-effective electricity generation from the sea – a concept once viewed by many as a distant ideology – really is possible.

One of the most innovative schemes currently in motion is the Scottish government’s £10m Saltire Prize, which has been attracting significant global interest for marine power.

Set up in December 2008 by the Scottish government in conjunction with National Geographic, the prize will accelerate the commercial development of  marine energy technology by rewarding the team or individual that achieves the greatest volume of electrical output over a set minimum 100 gigawatt hurdle across a two-year period using only the power of the sea.

There have been 171 registrations of interest from teams in 31 countries – with three competitors at this stage fully pledged – Aquamarine Power, Pelamis Wave Power and ScottishPower Renewables.

In addition to the pull of the £10m award, the project – which will last until July 2017 – will also encourage revolutionary breakthroughs in wave and tidal technology by offering world-class research facilities and an SNP government heavily supportive of the renewables industry.

The overall aim of the prize is to commercialise the marine energy industry in Scotland, allowing the country to capture a larger share of the growing UK, European and global marine market, which could be worth £4 billion to Scotland’s economy by 2020.

With government-backed initiatives like the Saltire Prize and the MRCF, there is strong assurance that Scotland will maintain its place as a key rallying point for global interest in the marine energy industry well in to the future.

If you would like to learn more about how to generate renewable electricity, visit Good Energy – the UK’s only 100% renewable energy provider.