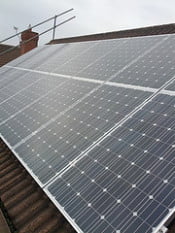 After weeks of uncertainty, the solar industry has received a welcome boost as the Supreme Court turns down the Government’s appeal against a ruling that described subsidy cuts as “legally flawed”.

This means that individuals who had solar panels installed between December 12 last year and March 4, will receive the higher tariff rate of 43p/kilowatt hour (kWh), instead of the lower rate of 21p/kWh that is currently in effect.

After weeks of uncertainty, the solar industry has received a welcome boost as the Supreme Court turns down the Government’s appeal against a ruling that described subsidy cuts as “legally flawed”.

This means that individuals who had solar panels installed between December 12 last year and March 4, will receive the higher tariff rate of 43p/kilowatt hour (kWh), instead of the lower rate of 21p/kWh that is currently in effect.

Commenting on the news, Friends of the Earth’s executive director, Andy Atkins said, “This is the third court that’s ruled that botched Government solar plans are illegal – a landmark decision that will prevent Ministers causing industry chaos with similar subsidy cuts in future”.

The High Court and the Court of Appeal had already rejected Government appeals after Friends of the Earth, along with solar providers HomeSun and Solarcentury, lodged legal action to the initial cuts in December.

Chairman of Solarcentury, Jeremy Leggett, said, “This final step in the legal process has wasted much needed time and money, and now we, the renewables industry, simply want to get on with creating our clean energy future.

“Renewables can only play the pivotal role necessary to deliver a new green economy if we have a stable market and investor confidence backed by lawful, predictable and carefully considered policy.”

The solar industry has been very vocal in its opposition to the cuts, stating that a high subsidy is needed not only to attract customers, but also to ensure that thousands of jobs in the sector are safe.

The Supreme Court ruling means that the Department of Energy and Climate Change (DECC) will be forced to shell out money to individuals who invested in solar between the stated three-month period.

And its budget is unfortunately not bottomless.

“It is vital that the solar industry receives sufficient support, or we risk losing good quality firms over the next year”, said Paul Barwell, chief executive of the Solar Trade Association.

“That will be against a backdrop of new and substantial public subsidies to the oil and gas sector.”

Barwell is referring to the announcement made by George Osborne in his less than green budget statement on Wednesday afternoon.

The chancellor highlighted that the oil and gas industries would be receiving billions of pounds of subsidies over the coming year. Our fuel bills will be lower – for a while – but it’s certainly not a sustainable step forward.

Following the Supreme Court’s ruling, Friends of the Earth’s Atkins added, “The Coalition must now get on with the urgent task of restoring confidence in UK solar power.

“The Government recently pledged a huge increase in solar by the end of the decade; it must now spell out how it is going to achieve this.

In January, Bloomberg New Energy Finance said that investment in the solar industry had reached $136.6 billion worldwide in 2011, accounting for almost half of all clean energy investment.

A continued financial push at both a corporate and private level is imperative, if the renewables industry is going to be taken seriously. B&GT recently published an in-depth report, called The Rise of Renewable Energy 2012, to highlight the importance of renewable energy in our clean power future.

If you find you fully support the idea of renewable energy, you can do something about it today, irrespective of faltering Government police. Simply contact Good Energy, the UK’s only 100% renewable electricity provider, who can help you convert your home or business to green power.