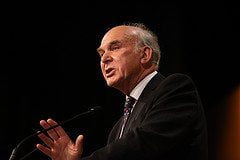 Business secretary Vince Cable has warned the government not to “rest on [its] laurels” over the recovering economy.

The comments are expected in a speech on Wednesday at the University of Warwick, where Cable will say that there are signs of growth within the economy. However, he warned that there was a long road ahead.

Cable told BBC Radio 4’s Today programme that the growth would not become “meaningful” until strong investment foundations had been built across industries.

He will say, “The kind of growth we want won’t simply emerge of its own volition. In fact, I see a number of dangers. One is complacency, generated by a few quarters of good economic data.”

The comments come despite chancellor of the exchequer George Osborne saying on Monday that the UK economy was showing “tentative signs of a sustainable recovery.”

Osborne also claimed that the economy was “turning a corner”.

The chancellor was criticised by Labour leader Ed Milliband, who said in a speech at the TUC conference that the government is “out of touch with ordinary families” by “congratulating themselves on the economy”.

Cable will also rely on the recent success of the car industry and growing exports in emerging markets as evidence that the economy is making a slow recovery.