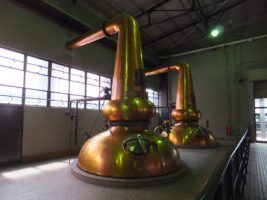 The Scotch Whisky industry’s drive for environmental sustainability and carbon reduction at distillery sites has been boosted by the success of an on-site bio-energy plant commissioned one year ago by Clearfleau (leading British provider of on-site Anaerobic Digestion – AD plants) at Diageo’s Glendullan distillery in Speyside, Scotland.

The plant is delivering a 25% reduction in fossil fuel energy demand at the distillery, saving Diageo significant costs and reducing its carbon footprint by 1,000 tonnes of CO2 per year. On-site digestion technology is boosting the circular economy in Scotland’s distillery sector.

12 month’s results show on-site anaerobic digestion at the Glendullan distillery at Dufftown (in the heart of Speyside), is converting approximately 1,000m3 per day of malt whisky distillery co-products into valuable renewable energy. This is about 1 million m3 of biogas per year – producing 6000 MW hours of thermal energy for the distillery.

Diageo and Clearfleau collaborated closely in developing the bio-energy plant at Glendullan and the initial plant at the nearby Dailuaine distillery that has been operational for over 3 years. Each on-site plant comprises a high-rate digester, specifically designed to handle liquid distillery co-products, followed by aerobic treatment for water clean-up.

The AD plants reduce the incoming COD load by over 95% and minimise further treatment required for the discharge of cleansed water to nearby rivers. It will help Diageo meet the Scottish Environment Protection Agency’s (SEPA) new plans for enhanced resource use – achieving low carbon emissions, improved materials use and energy savings. It will also enable local farmers to replace fossil-fuel-derived fertiliser with nutrient rich bio-solids.

Digestion of distillery residues is making a major contribution to Scottish targets for both carbon mitigation and the generation of renewable energy. The net carbon savings for the two plants, based on replacement of aerobic treatment with the innovative anaerobic bio-energy solution deployed at Dailuaine and Glendullan is about 3 tonnes of carbon a day.

Diageo also took the opportunity to invest in a new pipeline linking the nearby Mortlach and Dufftown Distilleries to the bioenergy plant at Glendullan, allowing co-products from all three distilleries to be processed and removing over 15 trucks a day from the local roads.

If the impact on the transport of co-products is included, the overall saving of carbon for the two sites increases to over 3,000 tonnes of carbon a year – for an expected 20-year period. If 10 additional, comparable on-site bio-energy plants were to be installed in the Whisky sector in the next 3 years, the net annual saving could exceed 30,000 tonnes of carbon.

“With the distillery sector setting tougher sustainability targets, SEPA’s beyond compliance ‘one planet prosperity strategy’ endorses practical action, such as optimising energy output from un-wanted co-products. We are working with Diageo and other distillers to deliver renewable energy solutions that support carbon reduction targets and a more circular approach to resource use.”

Diageo is committed to being one of the most environmentally sustainable beverage companies across its global operations. The company’s collaboration with Clearfleau at its Speyside distilleries has made a significant contribution towards this goal in its Scotch Whisky operations in Scotland. By boosting distillery efficiency, we hope to encourage more Scottish distillers to generate value from the residues from the whisky distillation process.