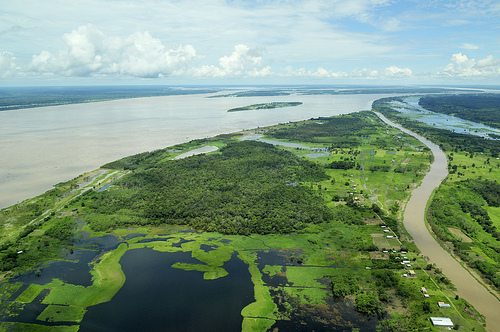 Deforestation in the Amazon region not only affects the local climate and biodiversity, but also access to water, food and energy for people in Latin America, a new report has said.

The Amazonia Security Agenda, released by the Global Canopy Programme and the International Center for Tropical Agriculture, outlines threats that Amazon loss poses to Bolivia, Brazil, Colombia, Ecuador and Peru – the countries that shares the world’s most important forest.

The report accuses governments of ignoring the high social and environmental cost of the economic activities that are benefitting from the Amazon’s resources, such as mining and agriculture.

It says, “This large-scale economic development in Amazonia has always been predicated on deforestation. But by compromising Amazonia’s ecosystems, deforestation is now threatening not only the wellbeing and rights of the region’s people, but also the economic sustainability of the very industries that it has enabled.”

Exploitation of the Amazon may lead to less plentiful energy, water and food resources. Meanwhile droughts are expected to increase and rainfalls to drop, because of climate change.

Manuel Pulgar, minister of environment for Peru, said, “In Latin America, we have taken Amazonia and its seemingly limitless water and forests as a given.

“But recent unprecedented droughts have shown us just what happens when that water security falters: it impacts food and energy production, it affects the wellbeing of entire populations, and it leaves governments and businesses with a big bill to pay. The science is clear, so we cannot afford to miss the opportunity for positive action now.”

The report calls on institutions to enforce access to water, food, energy and health. Carlos Klink, Brazil’s national secretary for climate change and environmental quality, commented, “The challenge that we are just beginning to recognise and act upon is one of transitioning to a more sustainable economy – one that values the role of a healthy Amazonia in underpinning long-term security and prosperity”.