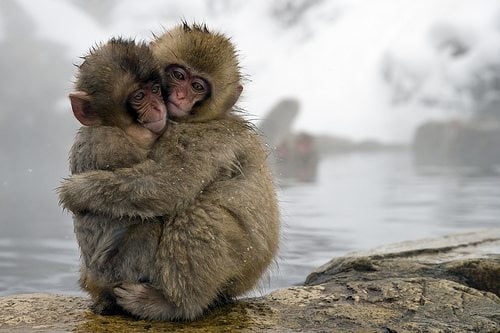 Abnormally low levels of white and red blood cells and haemoglobin have been found in Japanese macaques in the Fukushima region, with scientists suggesting that the phenomenon might be linked to the 2011 nuclear disaster.

A study that compared blood tests from 61 monkeys living 44 miles from the Fukushima Daiichi nuclear power plant with those of 31 monkeys from the Shimokita Penisula, – 249 miles from Fukushima – found the first group had low blood counts and radioactive caesium in their bodies, unlike their fellows living further away.

Speaking to the Guardian, prof Shin-ichi Hayama, from the Nippon Veterinary and Life Science University in Tokyo said, “This first data from non-human primates — the closest taxonomic relatives of humans — should make a notable contribution to future research on the health effects of radiation exposure in human”.

It is suggested that the presence of caesium could derive from contamination of the soil and food on which monkeys feed and scientists fear the abnormalities might make them more vulnerable to diseases.

However, both researchers and critics of the study have said the link is not clear, given the small amount of radiations that derived from the accident.

“The low haematological values in the Fukushima monkeys could have been due to the effect of any radioactive materials,” Hayama added.

“We did not conclude the low-blood cell counts are caused by caesium but so far we cannot find other reasons except radiation.”

The study follows another claim made by separate researchers, who argued that the nuclear accident triggered by the 2011 earthquake had caused an increase in thyroid cancer cases among children in Fukushima, although the link to the disaster has been contested in this case as well.