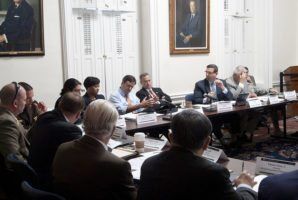 Since the beginning of the century governments have failed to provide secure and competitively-priced energy, according to a new survey of business leaders.

Almost 1000 bosses took part in an Institute of Directors poll which found that 7 in 10 thought Labour, Coalition & conservative administrations had all failed in making energy readily available. Two thirds also complained that politicians had not ensured the future power of the UK.

Directors felt energy policy had been more successful in increasing the use of renewable sources (59% agreed) and reducing carbon emissions (45%), since British politicians first pivoted in this direction shortly after the turn of the millennium. In 2002, the Labour Government under Tony Blair launched a review of energy policy that led to the first targets to cut CO2 and has set the tone for policy-makers since.

“Since the early 2000s, government of all stripes have focussed on increasing use of renewable energy in order to reduce carbon emissions. Cutting CO2 is overwhelmingly supported by business, but politicians have underplayed the other two crucial aims of energy policy, delivering secure and affordable power. Following the creation of the new business and energy department, now is the ideal moment for the Government to reconsider the direction of travel.

Renewables are a significant, and growing, source of energy. The UK has the world’s highest offshore wind capacity, with much more expected. But technology based on the weather doesn’t work all of the time, so the UK needs a mix of renewables, nuclear and the cleanest hydrocarbons.

“Government policy at the moment is creating all sorts of bizarre outcomes. Instead of accelerating moves to safely frack for gas and oil in the UK, we are importing coal and oil from Russia and gas and oil from Norway, with the extra costs and emissions that involves. Instead of building cleaner gas plants to meet demand when renewables can’t, the Government has been subsidising more polluting diesel-fired plants.

“The IoD backs nuclear as a reliable source of low-carbon energy, but each project has to make economic sense. Hinkley Point C would generate reliable power for 5 million homes, but given the costs, the Government is right to take one final look before signing off on the deal.”

Businesses want a broad mix of sources in the UK energy mix. A majority supported all mainstream forms of renewable power generation, although the most popular, wave and tidal, is still largely untested in the UK. Over half of IoD members also back hydraulic fracturing (known as fracking) of shale rock for oil and gas.

While IoD members have consistently supported building new nuclear power plants, firms are mixed on the Hinkley Point C project, which the Government is considering before making a final decision. A narrow majority (53%) think Hinkley makes strategic sense, but less than half think it will make the UK more economically competitive.