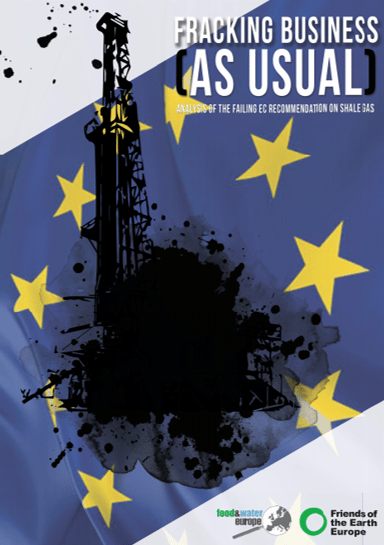 EU guidelines on how member states carry out shale gas exploration and production are failing to protect the environment and the health of citizens, a new report has found.

Jointly developed by Friends of the Earth Europe and Food & Water Europe, the report ‘Fracking business (as usual)’ says the European Commission’s Recommendation lacks the ability to force member states to even make minimal changes to their shale gas regulations. It also relies too heavily on self-monitoring by the oil and gas industry to control the worst impacts of fracking.

As a result, the report says member states are exploiting the weaknesses of the Recommendation and are failing to take adequate precautionary steps against the potential risks of shale gas, including publishing the chemicals used, safely disposing of fracking waste water, and liability for abandoned oil and gas wells.

Based on the report’s findings, Friends of the Earth Europe and Food & Water Europe have warned that the weaknesses of the Recommendation are increasing the likelihood of serious threats to communities such as ground water contamination, toxic air pollution, damage to landscapes, and health risks including cancer and birth defects.

Antoine Simon, shale gas campaigner for Friends of the Earth Europe, said: “The European Commission and EU Member States lack the political will and ability to strictly regulate the fracking industry. With mounting evidence about the negative impacts of fracking in the US and growing recognition of the long-term risks, we believe that the precautionary principle should be front and centre in decision-making on fracking in Europe. Relying on industry monitoring its own impact is like putting the the fox in charge of the hen house.”

Geert de Cock, Director EU Affairs for Food & Water Europe, said: “In the year of the critical Paris climate summit and with the impact of climate change becoming more severe by the year, the European Union must send a strong signal to the world that it is committed to keeping fossil fuels in the ground, starting with its own unconventional oil and gas resources.”

Introduced by the European Commission in 2014, the Recommendation asked member states to implement its minimum principles within six months of publication and committed to carry out a review of member states’ actions after 18 months.

In advance of the release of this review, which is due by the end of this year, and based on evidence from EU member states (in particular Poland, the UK, Germany, Spain, Romania and Republic of Ireland), the Fracking business (as usual)’ report has highlighted a number of deep inadequacies in the Recommendation:

Weak and non-binding: The principles outlined in the Recommendation are non-binding, poorly defined, and create legal uncertainty about the relevance of existing EU regulations.  They rely primarily on self-regulation by the shale gas industry, allowing operators to decide how best to prevent environmental and health impacts, how best to monitor the installation, and how best to protect the public.

The EU’s scoreboard: Evidence presented in the Commission’s own survey of member state responses (the “scoreboard”) reveals that only four states – Poland, the UK, Lithuania and Germany – have taken legislative or other steps following the introduction of the Recommendation, and that these measures do not fulfil the principles set out in the Recommendation.

Industry defines risks: While member states are encouraged to ensure that potential shale gas sites are fully assessed to identify potential risks, these risks are not clearly identified. Instead, the Recommendation suggests that these will be determined by dialogue between member states and industry.

Inadequate implementation: Risk assessments, monitoring and enforcement are recommended as essential in minimising risk and preventing environmental damage, but evidence suggests that member states often choose to ignore this process. The principles they do introduce are often very industry-friendly, undermining the transparency and legitimacy of the industry.

Regulatory cost: The non-binding nature of the Recommendation and the reluctance of member states to regulate shale gas exploration and extraction appear, in part, to be due to industry lobbying about the costs of complying with regulation. But analysis by the International Energy Agency suggests that compliance with key environmental mitigation measures would add just 7% to the overall cost of drilling and completing a shale gas well. This appears minor compared to the costs of extraction in Europe, which can be 300% times higher than in the US.