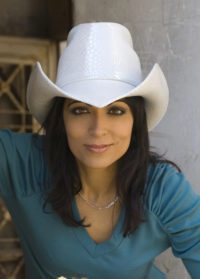 Sudha Kheterpal, is the British-Indian musician and percussionist in Faithless, turned energy entrepreneur and EU Sustainable Energy Week ambassador.   She is also behind Spark, a shaker percussionist instrument that can be played during the day and will convert energy into power at night; power to provide light or the ability to charge a phone in parts of Africa with no electricity.

She has toured the world with Faithless and other huge acts, such as the Spice Girls and Dido, and understands the value of music in unifying people as well as the energy needed for performances. It was this understanding that inspired her to become a found Shake Your Power to bring clean energy and education through the power of music.

Shake Your Power is one of the founding members of the Off the Grid Club which has been developed and nurtured by EnergyNet, the pioneering energy-focused organizer of forums and collaborations designed to facilitate investment in Africa’s power and industrial sectors. Off the Grid Club provides a networking platform for technology providers and financiers working in Africa’s off-grid energy space and launches in festival style on the 23rd June with a gig celebrating African music at the Africa Energy Forum in London.

The Off the Grid Club gig (curated by Sudha) will bring together a diverse range of artists including Fuse ODG, the MOBO Award winning British-Ghanaian rapper; Imaani, the silky voice behind the iconic band, Incognito; Afriquoi, the five piece outfit fusing African melodies and rhythms with house, funky, garage and dubstep; and DJ Rita Ray, the club and radio DJ who helped to rejuvenate London’s world music scene with the Mambo Inn.

Shake Your Power connects people through music with Spark, the world’s first clean electricity-generating musical instrument that creates and stores energy as you play.

2. What was the driver for creating Shake Your Power – what gap did it fill?

Playing music has been my life and bringing thousands of people together through the power of music is something that has always left me with a sense of purpose. For many years I have wondered whether the huge amounts of energy created from performing on some of these stages could be harnessed and used. But there is also a deeper motivation, one aligned with a changing of the collective consciousness, to help find a new way of creating a more sustainable future.

3. Who does it primarily serve?

Spark has been designed for users living in off-grid communities, to give them the power to light their homes at night and charge a mobile phone through the power of music. The aim is to distribute Spark to rural schools in Africa as well as Spark educational assembly kits, allowing children to learn the technology around the shaker by building the component parts themselves and harnessing their own power. Children studying science, technology, engineering and music will all benefit from the application that these kits show.

4. What difference does Shake Your Power want to make?

In places like Kenya, where 75% of the population lives without access to electricity, having the ability to read at night or charge up a mobile phone gives people the chance of a better education and access to health services. Energy poverty is the world number one human and environmental crisis and it’s our desire for every child living in the world to have the opportunity to change their life. Through Spark we can teach children that interconnectivity is the way to our future and the key to the wellness of our planet.

5. What are the barriers to making that difference?

Getting access and collaboration between the right people is the biggest challenge – getting the right innovators, finance and people who will actually make a difference in Africa talking to each other. That is why the Off the Grid Club is such a fantastic and meaningful project to be a part of; because it’s working with regional leaders who can get things to happen in their country.

6. Who’s helping you overcome those barriers?

EnergyNet, Simon Gosling in particular. Their expertise, experience and ability to bring the right people together is making a real difference and will help African communities to establish the infrastructure required to move forward economically.  That’s why I am supporting Off the Grid Club which was developed by Energynet.

I think success will come from the collaboration of governments, policy-makers, regional and international investors and technology entrepreneurs – together, they will provide solutions that will really make a difference. The Off the Grid Club brings these parties together, fostering relationships between them and regional leaders and acting as a catalyst for the development of off-the- grid power solutions and energy access in Africa. The Club is determined to help Africa meet its target in the international drive for universal access to energy by 2030.

8. How can people – individuals and organisations – find out more about Shake Your Power?

You can learn more on shakeyourpower.com or check out how the Off the Grid Club (website) is making it happen. The Off The Grid Club officially kicks off on the 23rd June at the Africa Energy Forum in London with a festival-style gig celebrating African music.

9. Where did the idea for Off the Grid Club come from?

EnergyNet developed the Off The Grid Club as a new membership programme to bring together credible off grid technology providers, financiers and regional leaders to invest in and develop reliable and scalable power solutions for Africa. The programme will provide a platform for members to form partnerships, giving them the opportunity to scale up their products and bring them to market more quickly.

The Off The Grid Club will launch at the Africa Energy Forum in London this June, as African artists come together to perform in a special gig to raise awareness of the importance of energy access. The gig is organised in partnership with Shake Your Power, one of the Founding Members of the Club. Music will be used as a way of communicating to and uniting the audience, and to recognise how commercial off grid solutions can play a significant role in electrifying Africa.