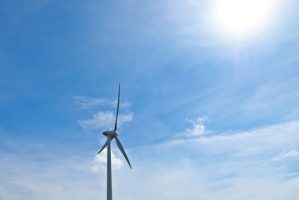 Sharenergy has launched a new community renewable energy project in Wales and Scotland this week. Three turbines will be constructed in total in Ceredigion, Wales and Inverclyde, Scotland. The project focuses on farm-scale wind turbines and encourages local communities to get involved by investing in shares and bonds.

The Small Wind Coop offers people the chance to support three community turbines: one at Troed y Bryn in Ceredigion, Wales and two at Wemyss Bay, Inverclyde, Scotland – the first time a community energy project has brought together farm-scale wind projects in different countries within the UK.

Members of the Small Wind Coop will also be able to nominally use the energy generated by the turbines in their homes and businesses if they sign up to Co-operative Energy for their energy supply thanks to its “User Chooser” tariff.

Small Wind Coop is offering two types of investment: bonds, which have a return of 4.5% and will be repaid after 6 years; and shares, which offer a projected average annual return of 6.5 % over 20 years and entitle people to become members of the co-operative and have a say in how it’s run.

Thanks to the government’s new Personal Savings Allowance, for most people the returns will be tax free.

Jon Halle, Director, Small Wind Coop, said: “We know that people don’t trust the big energy companies, which is why we are a small co-operative, which is completely owned and run by our members – no ‘fat cats’ here.  And we know that people want to support renewable energy in the UK directly – so we set up the Small Wind Coop to make that possible.”

As well as offering a stable return for members and bondholders, the project will generate a community fund of £3,000 a year (index-linked) for 20 years at each location, to support local projects bringing social, economic and environmental benefits to the area. It is also supporting the small farms in the areas where the turbines will be built.

Troed y Bryn in Wales has been farmed by the Davies family for generations. It is mainly a sheep farm, although the family has also been rearing horses, which have been in the Welsh stud books for 100 years.

Farmer Aled Davies said: “Farming has become increasingly hard. We wanted a wind turbine on the farm to keep us going for the next generation. A community-based turbine will generate income for the farm, for the village and everybody who becomes a member.”

Kellybank is a small farm in Inverclyde, overlooking Bute. With a small head of quality beef cattle, it is run by retired local milkman Alister McIntyre with the goal of having a going concern for his family to take over.

Alister McIntyre said: “We already have one small turbine on the farm and we felt it would be good for community, good for us all, if we made use of land that wasn’t doing a lot at present. We’re using the resource we’ve got, and that’s wind, and it will always be windy.”

Sharenergy, based in Shrewsbury, has helped set up over 30 community energy projects throughout the UK.

Leila Sharland, Community Renewables Adviser, from Sharenergy, said: “This could be one of the last chances to join a community wind cooperative following recent changes in government support. And as well as supporting ordinary UK farmers in Wales and Scotland, we’re offering our members a new way to connect the energy they are helping to generate with the energy they use at home or work. It’s a really exciting opportunity to be part of a new UK energy democracy.”

You can invest online via the Crowdfunder website, and can find out more by visiting the Small Wind Coop website where you can also download a Share Offer Document giving all the details about the project.