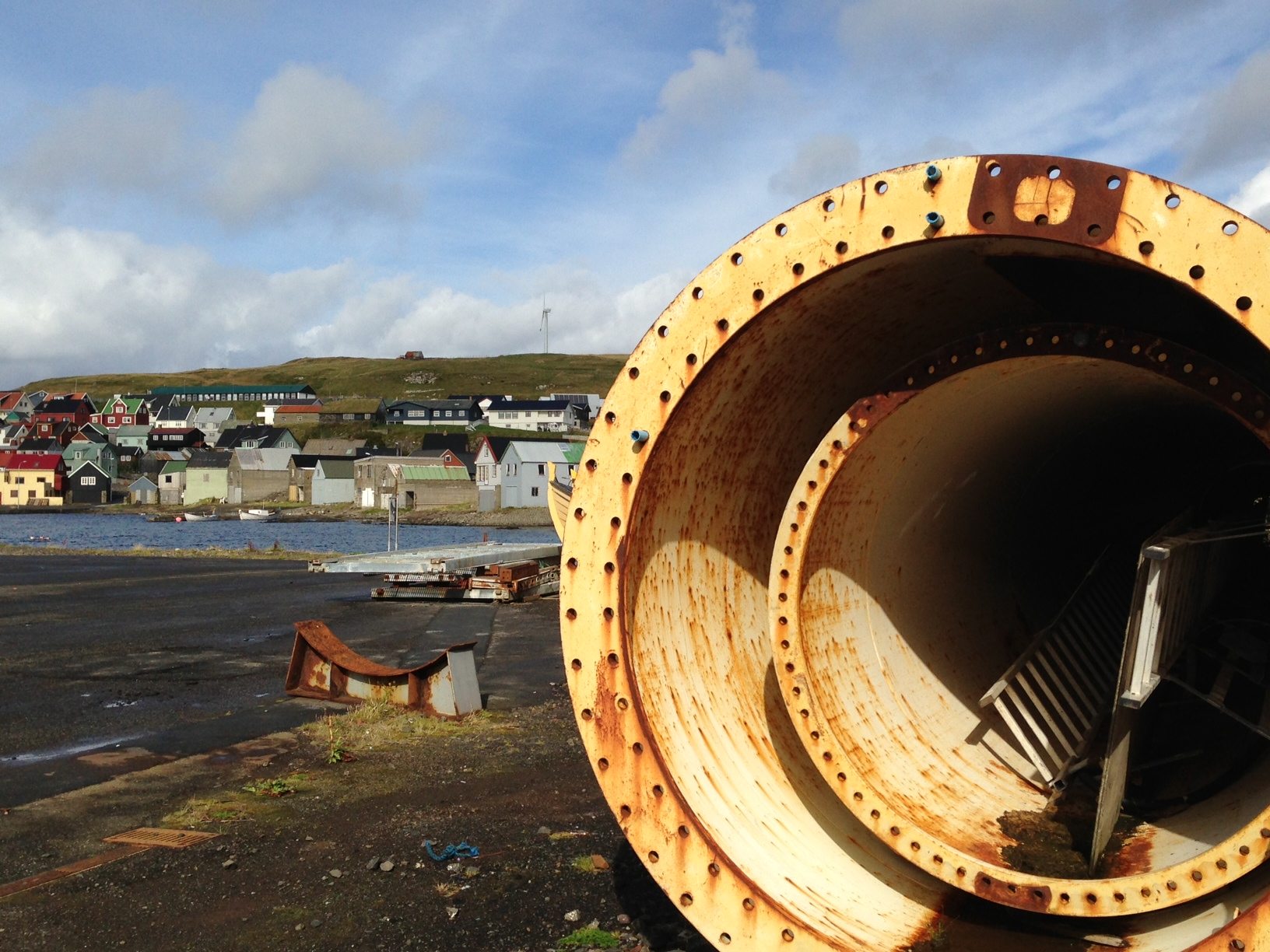 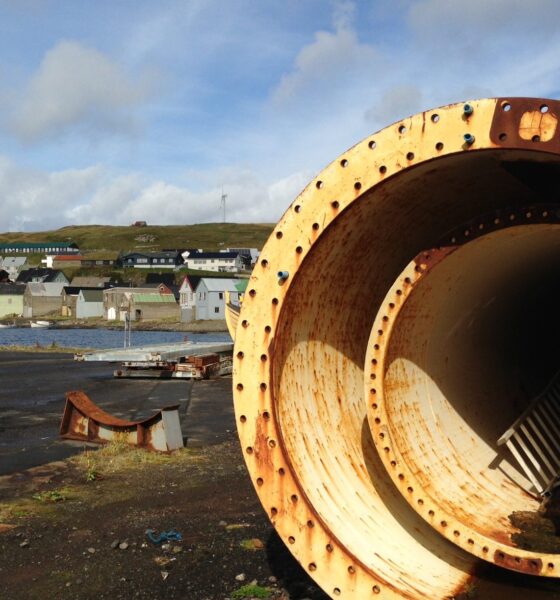 There’s an old Faroese saying – betri er at vera fyrivarin, enn eftirsnarur (it’s better to be prepared than swift afterwards) – that can be used as a tagline for the morning of my third day in the Faroe Islands.

I had travelled by ferry from the capital Tórshavn to the nearby island of Nólsoy to meet Bjarti Thomsen, the chairman of a local wind power association. As we approached the island and the boat made its way into the small harbour, I saw a single turbine on the top of a hill, standing above the 100-or-so houses like some kind of 21st century gatekeeper.

Bjarti greeted me as I stepped off the ferry. It was a windy day on Nólsoy, and whereas once upon a time he would have looked at the weather forecast, seen the forecasted high winds and grimaced, he now celebrates. That’s because for over seven years, he has been the driving force behind his island’s shift to clean, decentralised energy – specifically, wind.

The Faroese government hopes wind can produce nearly a quarter of the country’s electricity as soon as 2014. And the country’s conditions certainly favour the technology. Studies over the last decade or so suggest that onshore turbines situated on certain islands in the Faroes could be twice as effective as even some of the best offshore locations in Denmark – a renowned world leader in wind energy.

Indeed, it is Denmark where the Nólsoy community bought its two 220 kilowatt wind turbines. Both structures had stood proud in the country for nearly two decades, before being retired in favour of newer, larger models. Still in perfect working condition, though, they were bought for a fraction of the cost a pair of new turbines would command.

Nólsoy’s interest in wind energy began in 2006 with the formation of an interest group. Local information meetings were held regularly over the next couple of years, with Bjarti – who has a background in electronics – studying the economics, technicalities and maintenance of the potential wind turbines intensely. He did part-time university courses and even travelled to Denmark to speak to experts. This was a man who was slowly becoming a wind power expert.

Seeing the interest in Nólsoy for the introduction of wind power, the Faroese government gave the community a grant of 1.8m Danish krone (just over £200,000) in May 2010. The project had become a reality, and a limited company was swiftly set up: Nólsoy Energy Ltd. Fourteen members of the island community collectively stumped up 300,000 krone (nearly £34,000) to help the firm get over the line. 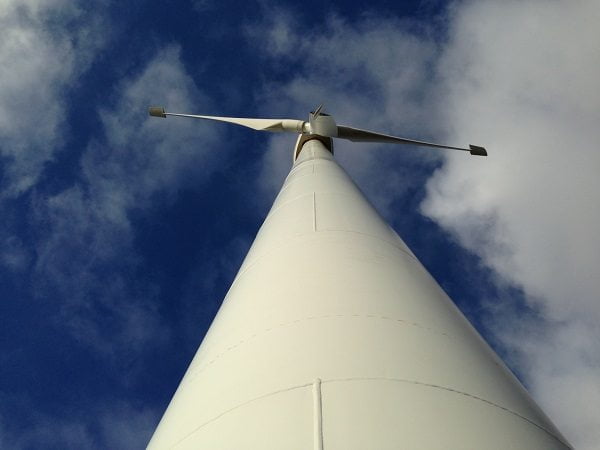 Construction of the first turbine took time, beginning in November 2011 and finishing in the summer of 2012. The single turbine that stands on the hill above Nólsoy now is still in the preliminary stages, while Bjarti and co-workers Bjørn Elíson and Magnus Thomsen fit cables and wires to connect the first set of houses to the island’s natural resources.

But perhaps the most interesting part of the whole operation is what the turbines will actually be doing. Instead of generating electricity for lighting and so on, the power is stored in a heat pump and used to heat Nólsoy homes – a process called space heating.

Bjarti said theirs was one of the first wind projects of its kind anywhere in the world. And his motivation for going with energy as opposed to electricity (there is a difference) was almost entirely economic (at one point I made a comment to Bjarti about the weather, to which he joked that the prospect of global warming in the Faroe Islands was actually quite attractive). With the price of oil expected to increase in the coming years, as reserves become more difficult to find and extract, the islanders wanted a way to become self-sufficient. And the Faroe Islands’ vast and free resource of wind was the obvious long-term replacement.

The process is straightforward. The turbine turns, generating electricity that is passed through electrical wires to a control centre in the village. The eight houses that are currently connected either have their own boiler or they’re controlled by the large tank (an old oil container) in the control centre, which pumps heat to the houses as and when it’s needed.

Bjarti showed me two charts, as we ate food and drank coffee prepared by his wife Sigrid in their family home. One showed the energy demand in Nólsoy over the course of an average year; the other showed energy production at the turbine site over an average year. They were almost identical, with both displaying a U curve that dipped in the summer months and rose into winter.

Bjarti, Bjørn and Magnus have devoted almost all of their free time to working on the wind project in the last few years (I met them on a Saturday morning, and all three were working when I got there). Bjarti’s devotion to the cause led him to taking a job at the Faroese Earth and energy directorate (the equivalent of the UK Department of Energy and Climate Change). His research into wind has been meticulous – looking at wind speeds, noise pollution, impact on birdlife and more.

I asked him whether there had been any opposition from the local community, and he said there hadn’t been. Everyone in Nólsoy is behind the project; everyone understands why the turbines are being constructed.

The key thing that I took away from Nólsoy, as I travelled back to Tórshavn on the ferry, was that community engagement and rigorous planning is absolutely essential to having a successful wind project. It’s obvious that there’s going to be some form of opposition when a multinational energy firm decides, with no engagement with local people, that it is going to install a wind farm in a nearby field. I wouldn’t particularly want that in my back yard, either.

But if the local people are properly informed, involved in the planning process and even financially rewarded, then wind is fantastic. It’s a free, clean source of energy that brings with it no external health costs or danger warnings. And it will never run out.

In a place like the Faroe Islands, where it’s windy almost all of the time, it’s the obvious path towards a future of sustainability, self-sufficiency and decentralised energy.

This is the third of four diary entries from Alex Blackburne’s recent trip to the Faroe Islands. Read the first entry here and the second here.