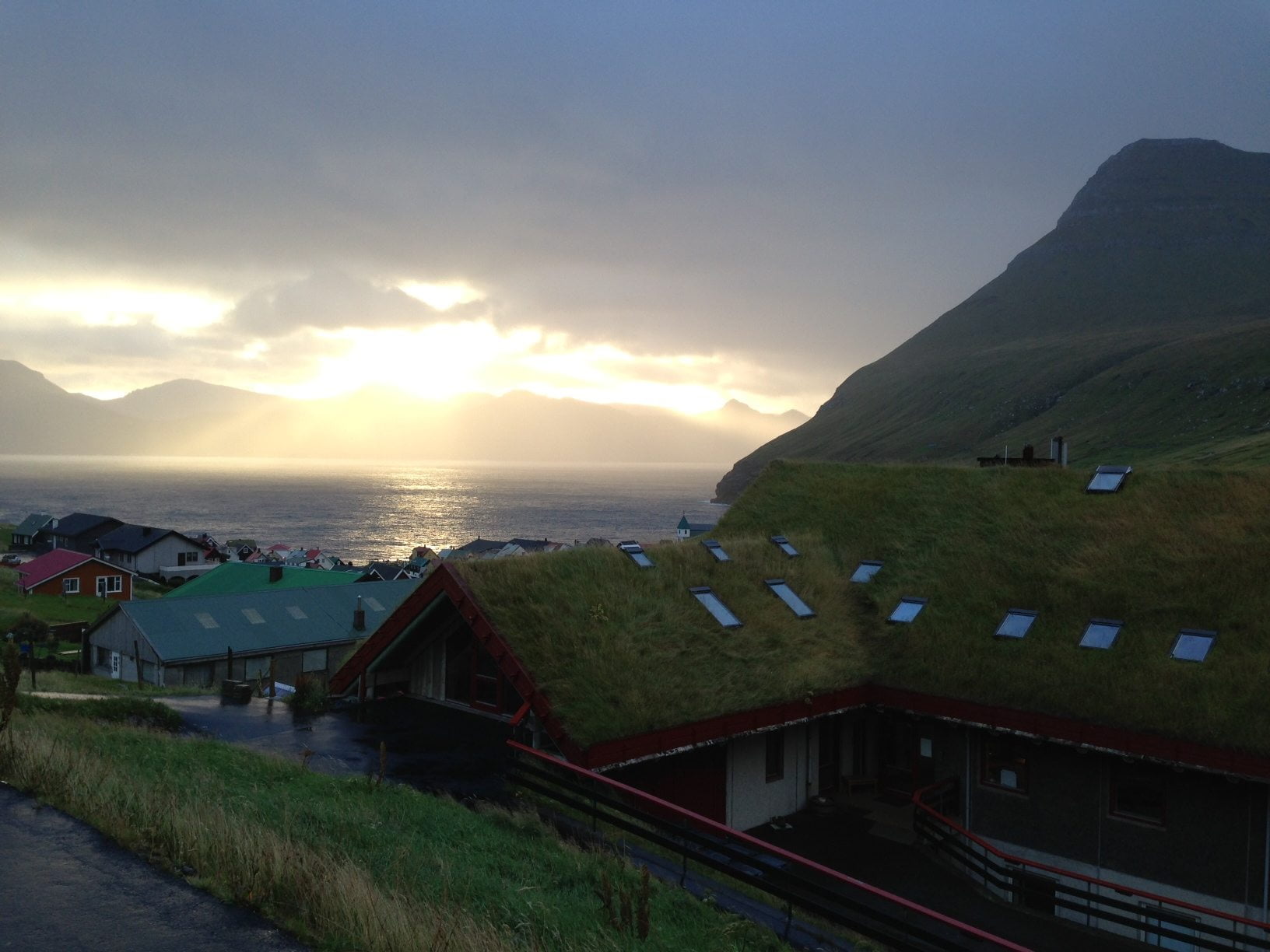 It was 7am and the sun in Gjógv, on the northern tip of the Faroe Islands, was peering through the clouds on the horizon, casting a yellowy-orange glow over the island of Kalsoy in the distance. It had been raining overnight, with the early morning rays reflecting off the dew-covered grass.

The striking landscape outside my window was more akin to Narnia or Middle Earth. And despite a long first day in the Faroes, mostly spent walking and travelling, it was unsurprisingly an even more attractive option than sleep.

After a breakfast at the Gjáargarður guesthouse made up of assorted bread, cheese and meat, I met with Olga Biskopstø, head of the government-funded Útoyggjafelagið, also known as the Outer Islands Association. The Faroe Islands consists of 18 separate islands, and the smallest eight – Fugloy, Svínoy, Kalsoy, Mykines, Koltur, Hestur, Skúvoy and Stóra Dímun – form part of the coalition.

Whereas the main islands are connected by bridges and underwater tunnels, these eight are only reachable by boat or helicopter. There are few jobs (most are farmers) and even fewer services – meaning the islands’ 200 or so inhabitants are often forced to travel elsewhere for work and supplies.

Stóra Dímun, for example, one of the smallest islands in the Faroes, has only one family – a brother and sister, their spouses and children. The children are taught partly on the island and partly via Skype (incidentally, the internet connection and mobile phone network across the country are generally very good).

While this way of life may have once been unavoidable across the Faroe Islands, better and cheaper transport links, and a greater need for employment, means families are moving elsewhere – perhaps to the country’s capital, Tórshavn, or worse: abroad. Population across the outer islands therefore declined by an incredible 40% between 1999 and 2010 (though the Faroese population overall has been fairly stagnant – and if anything, grown – over the past few years).

The Outer Islands Association was set up in 2001 to reinvigorate the eight outer islands – and put an end to their population decline. Olga, from Klaksvík – the Faroes’ second largest town – works at the university in Tórshavn, and heads up the association in her spare time.

“They wait and hope”, she said of the outer islanders – many of whom have gone to great lengths to really engage with the work Olga and her team are doing. The eight islands were once alone and anonymous; now they are together and have a voice.

For the Outer Islands Association, tourism is playing a key role in attempting to refresh the eight islands it covers. It is often the case that the people who moved from the outer islands to the towns such as Tórshavn, Klaksvík and Hoyvík, kept hold of their original properties as a holiday retreat of sorts.

The problem is, Olga said, such houses are therefore unoccupied for as much as 50 weeks of the year. The owners are also either reluctant to rent them out or unwilling to sell up – or worse: both. Olga added that Gjógv, where I stayed for the first night, is made up almost entirely of summer houses, making an already sleepy village even sleepier.

However, there is a concerted effort to attract a greater number of visitors to the islands. Around 40,000 people a year visit the Faroes from abroad – a figure that is increasing. “We don’t want a lot of people here”, Olga said, pointing out that the Faroese way of life and the country’s nature should not be sacrificed in the name of tourism.

“It needs to be sustainable”, she added. “People come to the Faroe Islands for the quietness, for village life and to feel anonymous. We don’t want to be another Spain.”

By that, of course, she means that the islands don’t want to become a hotspot for budget holidays. But that seems very unlikely given that most things in the country are really quite pricey (my guide from the first day, Andrias, said that one of the only things cheaper in the Faroe Islands than in the UK is petrol). Reykjavík, the capital of neighbouring Iceland, may have become a popular destination for exuberant stag weekends, but as long as the high cost of living remains so, it’s unlikely that anywhere in the Faroe Islands will follow suit.

In the outer islands specifically, it’s hoped that by increasing tourism, women will stay on the islands. The ratio between men and women already favours the men in the country generally, but in the eight smallest islands, the mismatch is even greater. The possibility of jobs in tourism and small crafts could well go some way to solving this.

The Outer Islands Association is also at the forefront of calls for young people to get better education and aim higher than farming, carpentry and fishing. But by doing this, Olga said, they’re shooting themselves in the foot – as many then move away to work. There’s a clear goldilocks zone on this issue, in which it’s stressed to the young people that they can be successful in other, newer areas in their home country, instead of abroad. 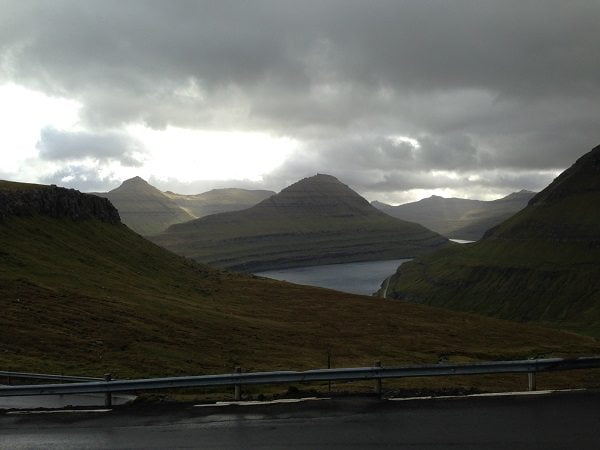 After my chat with Olga, I headed south for the Faroese capital Tórshavn. There, I met Súsanna Sørensen from the country’s tourist board at Etika – a sushi restaurant located in the town centre. It’s fair to say the food was infinitely better (and much fresher) than the Tesco-bought sushi I’m used to back home. It was here that I got my first taste of Faroese salmon (if you read my first diary entry, German football coach Joachim Löw was right). I’d also recommend the cod tongue, which may sound rather disgusting (who knew fish even have tongues?) but is actually incredibly tasty.

I spent the afternoon exploring the area around the apartment I’d be staying in for the next two nights – a short walk from the Tórsvøllur national football stadium. The centre of the country’s capital is much more urbanised than the tiny Faroese villages I’d been to and driven through before. Its amenities are sufficient – mostly small, independent shops, bars and restaurants – and there is a shopping centre a short walk out that serves as a pinprick in the side of the cosy bubble in which the Faroes sit (there is a Burger King but no McDonalds in the country).

A conversation I had with Súsanna over sushi summed up the Faroese way of life. We were discussing my schedule for the next few days, when the topic of renewable energy came up (the Faroe Islands are big on wind and hydro). “Gjáargarður, where you stayed last night, has solar panels, you know”, she said. I laughed, and said that despite discussing the purpose of my trip with the guesthouse staff when I arrived, they hadn’t mentioned that.

“We don’t like to boast”, Súsanna replied. That may be the Faroese way, but boy could they boast.

This is the second of four diary entries from Alex Blackburne’s recent trip to the Faroe Islands. Read the first entry here.