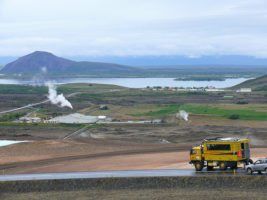 The Future of Geoenergy: Digging Deep to Power Our Planet

Asked to give a list of the top five renewable energy sources, most people will include sunlight, wind, biomass and hydroelectric, but how many would include geothermal energy? For many the idea of getting inexhaustible supplies of clean energy from below the earth’s crust seems the stuff of science fiction, but scientists and engineers believe that geothermal will be one of the main sources of energy in the future.

What is Geothermal Energy?

Simply, geothermal energy is the heat beneath the earth’s surface. The earth’s crust is a very thin skin over a vast cauldron of energy, power which moves the continents. One only has to witness a volcanic eruption to get a glimpse of the heat which is there and its unimaginable strength.

In some places the crust is thinner than in others, and there the heat comes close to the surface, sometimes becoming apparent in hot springs and geysers. This is particularly true in zones that are geologically active, as around the Pacific Rim.

Much of the usable energy is in the form of super-heated water, which is contained in the hot layers of the earth. It is taken there in huge quantities by the movement of the earth’s plates under the oceans.

How Can We Harness Geothermal Energy?

For lower temperatures it is possible to use direct heat. Pipes simply bring the hot water from under the ground and direct it to the place where the heat is needed, such as buildings, factories and agricultural premises. Alternatively water can be pumped through hot rocks in a closed system to bring the heat to the surface.

Geothermal power plants go much deeper and access water at much higher temperatures. These drill down a mile or more, and then pipe the steam or hot water to the surface where it is used to drive turbines, using a variety of technologies, to produce electricity.

Enhanced geothermal systems go a step even further by injecting water from the surface and forcing it through the natural fractures and permeations in the hot rocks. This greatly increases the potential number of sites where geothermal energy can be extracted.

Who is Using Geothermal Energy?

Drilling is a major engineering undertaking, but test drills using modern techniques such as reverse circulation drilling are making the exploration of new areas much more feasible, so more and more nations are exploring the possibilities.

The Future is Renewable

As we move towards an era when alternatives to fossil fuel become more important, geothermal power is rapidly becoming a leader in the race to provide clean and unlimited energy for the world.

Tom Williamson is a geologist and fully admits to being a boffin! He loves sharing his knowledge with anyone who will listen, even if they think they don’t know a thing about geology and spends a couple of evenings each month writing articles for online publication.