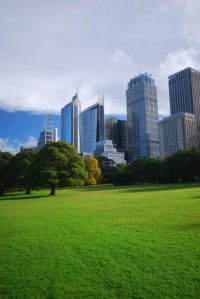 Global green building is expected to double by 2018, according to a new study from Dodge Data & Analytics and United Technologies Corporation, on which the World Green Building Council (WorldGBC) was a research partner.

The study, World Green Building Trends 2016, Developing Markets Accelerate Global Green Growth, finds that the percentage of companies expecting to have more than 60 per cent of their building projects certified green is anticipated to more than double by 2018, from 18 per cent currently, to 37 per cent.

The anticipated growth will largely be driven by countries that still have developing green markets, with firms from Mexico, Brazil, Colombia, Saudi Arabia, South Africa, China and India reporting dramatic growth in the percentage of their projects that they expect to certify as green.

The study, produced with support from United Technologies, a member of WorldGBC’s Corporate Advisory Board, and with additional support from the US Green Building Council and Saint-Gobain, also on WorldGBC’s Corporate Advisory Board, features the results of more than 1,000 building professionals from 69 countries – including Green Building Councils and their corporate members, from architects and contractors, to owners and engineers.

It follows an earlier study from 2013, which Green Building Councils also contributed to. For that study, as with this one, a green project is identified as one that is either certified or built to qualify for certification under a recognised green standard, such as LEED, BREEAM, the DGNB System, Green Star and many other tools.

Other key findings from the report include:

Terri Wills, CEO of WorldGBC, and who is interviewed as a thought leader in the study, said: “This study offers further evidence on the strong business case for green building – the growth of which is now truly a global phenomenon. Green building is playing  a critical role in the development  of many emerging economies, particularly as their populations grow and create a pressing need for a built environment that is both sustainable and ensures a high quality of life.

“Green Building Councils and their members around the globe will play a pivotal role in delivering this projected growth, and their leadership and expertise will be vital in realising the multiple social, economic and environmental benefits that green buildings offer.”

John Mandyck, Chief Sustainability Officer at United Technologies Corporation, said: “The survey shows that global green building activity continues to double every three years. More people recognise the economic and productivity value that green buildings bring to property owners and tenants, along with the energy and water benefits to the environment, which is driving the green building industry’s growth. It’s a win-win for people, planet and the economy.”

Pascal Eveillard, Director for Sustainable Habitat at Saint-Gobain, said: “At Saint-Gobain, we try harder every day to improve people’s lives while meeting global challenges of growth, energy efficiency and environmental protection. We have long been convinced that sustainability is a major trend in the construction market. The World Green Building Trends 2016 report is comforting us, as it shows that it is a market expected to double by 2018.”

Rick Fedrizzi, CEO and Founding Chair of USGBC, said: “As this report shows, international demand for green building, due in great part to the LEED green building program’s global popularity, has grown steadily over the years. Countries are looking for tools that support stable and sustainable economic growth. International business leaders and policy makers recognise that a commitment to transforming the built environment is crucial to addressing major environmental challenges.”

A copy of the study is attached and available online here.