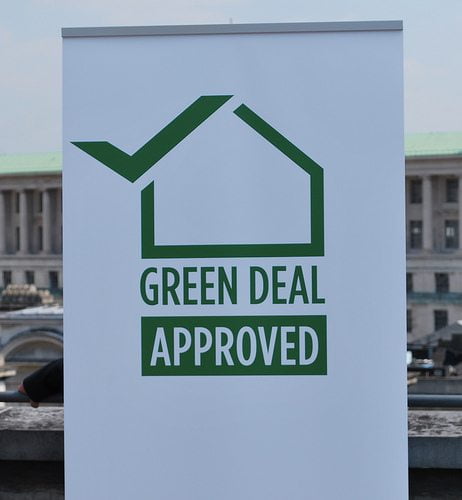 The Green Deal scheme has been closed to all new applications this afternoon after the Government ruled out further funding of the Green Deal Finance Company.

The Government says it will now work with the building industry and consumer groups on a new value-for-money approach. The decision has no impact on existing Green Deal Finance Plans or existing Green Deal Home Improvement Fund applications and vouchers.

Amber Rudd said: “We are on the side of hardworking families and businesses – which is why we cannot continue to fund the Green Deal.

“It’s now time for the building industry and consumer groups to work with us to make new policy and build a system that works.

“Together we can achieve this Government’s ambition to make homes warmer and drive down bills for 1 million more homes by 2020 – and to do so at the best value for money for taxpayers.”

The Government has commissioned an independent review led by Peter Bonfield to look at standards, consumer protection and enforcement of energy efficiency schemes and ensure that the system properly supports and protects consumers.

Current Government policies including the Energy Company Obligation (ECO) scheme will continue to provide support this year to low-income and vulnerable households.

DECC says it will work in partnership with the Department for Communities and Local Government to improve the UK’s existing housing stock. The longer-term future of the Energy Company Obligation scheme will be part of these discussions around a new, better-integrated policy.

In a statement, the Green Deal Finance Company (GDFC) said it will no longer be able to quote for further Green Deal Plan applications. It announced that it will cease accepting applications for new Green Deal Plans with immediate effect from 3.30pm on 23rd July.

This is to ensure that sufficient funds exist to support those applications that have been lodged in recent weeks and are already being processed. GDFC intends to purchase all eligible applications which were booked in its systems.

All customer repayments under existing Plans will continue as normal into the future. The decision was taken in response to the review by Department of Energy and Climate Change of energy efficiency policy and the subsequent decision not to increase the size of the current commercial loan between GDFC and DECC.

Mark Bayley, Chief Executive, Green Deal Finance Company said: “The most important thing at the moment is for us and the Department to reassure those who currently have Green Deal finance plans in place and those with approved applications, that today’s announcement does not change anything for them.

“We have taken this step to make sure we can meet all our expected liabilities and to have an orderly run-down of new business, while protecting existing plan holders and those whose applications are eligible and have been approved.

“We appreciate that the government must review its energy efficiency priorities and we are grateful to DECC for its considerable support over the life of the GDFC. We are also proud of what has been achieved in only a relatively short time: our business has grown from its inception two years ago to over £60 million in plans and applications today.

“We have more than met our mandate of creating a national infrastructure for a Pay-As-You-Save scheme.”

Mark Bayley went on to the praise the entrepreneurship of a new generation of SME energy efficiency firms that support the Green Deal. He added: “Our network of small and medium size firms – the 70 Green Deal Providers – have done a fantastic job of making the Green Deal work. Our very strong growth over the past year has been driven by their efforts and investment.

“We’ve also provided over £75 million in trading lines to our small business partners over the last two years. My priority now is to ensure an orderly closure to new business and to fund eligible plans already submitted by the Providers.”

Martin Callaghan, Chairman of the GDFC, added: “We are obviously disappointed that we cannot develop the Green Deal further but I would like to thank Mark and the GDFC team for their herculean efforts to make the programme work.

“It is a real achievement that they have built demand to £60m of Green Deal finance plans and applications in the two years since the first Green Deal Plan was purchased.”