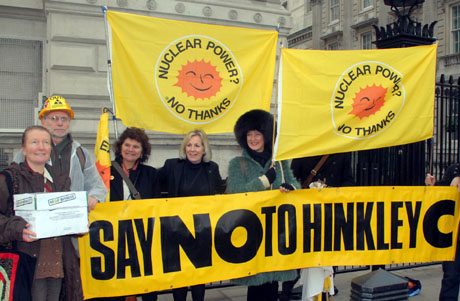 This Wednesday, 27 January, the Board of EDF is expected to decide whether to take a final investment decision on funding the controversial new nuclear plant at Hinkley Point. But EDF have some very substantial problems which suggest that giving Hinkley Point C the go-ahead could call the very future of the company into question.

As The Ecologist website puts it, the Board meeting “was meant to be a rubber stamp but now it’s anything but, as EDF’s share price sinks to a new low, unions and employee directors harden their opposition to the project, and projects in France, Finland and China run way over time and cost with severe technical problems and safety concerns.”

The managers’ union CFE-CGC has warned that a Hinkley Point C go-ahead would put the utility at risk and have challenged the Board with 15 questions about the project on timetable, financing, legal status and industrial benefit. The second largest shareholder after the French Government has asked for the project to be halted.

Stop Hinkley Spokesperson Roy Pumfrey said “The EDF Board would be foolhardy to commit to building two EPRs at Hinkley Point C when the Company is in such a precarious position and there are still no EPRs operating anywhere in the world. We know there is considerable unease amongst employee shareholders about Hinkley Point C, which some fear could sink the company altogether.”

“The Stop Hinkley Campaign agrees with the many commentators who have said that EDF is in no fit state to finance such a massive new project. So even if the Board does recklessly make a final investment decision on Wednesday the project will probably fall apart because of the difficulties the Company faces elsewhere. “

According to the French newspaper, Les Echos, and Greenpeace sources, the board meeting to decide whether to invest in Hinkley Power Station has been postponed.

John Sauven, Greenpeace Executive Director said “The EDF board is clearly rattled as they delay yet again this crucial investment decision. It could well signal curtains for Hinkley. EDF managers as well as employee representativeson the board are deeply concerned this project is too risky and too expensive. George Osborne is almost alone in defending Hinkley’s honour. But he is pushing the project forward regardless of the eye watering expense for consumers and regardless of the fact that this reactor design, despite three attempts in Europe and China, doesn’t work. All three projects are massively delayed and hugely over budget. There isn’t a shred of evidence that it’ll be fourth time lucky in Somerset. The UK government needs to join the 21st century and start backing the renewable technologies that are proven to work, are cheaper than nuclear power, create jobs in the UK and contribute to the fight against climate change.”