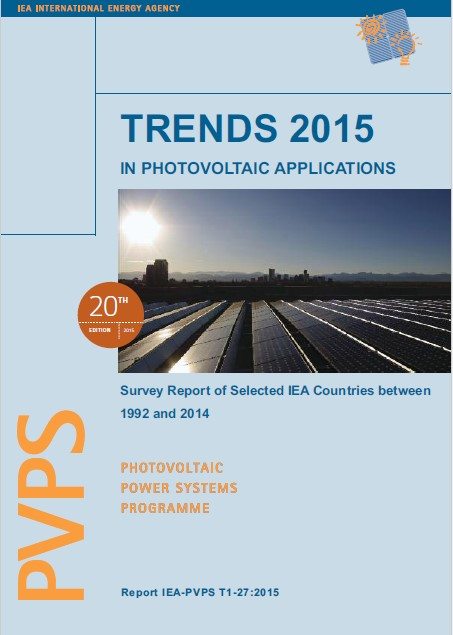 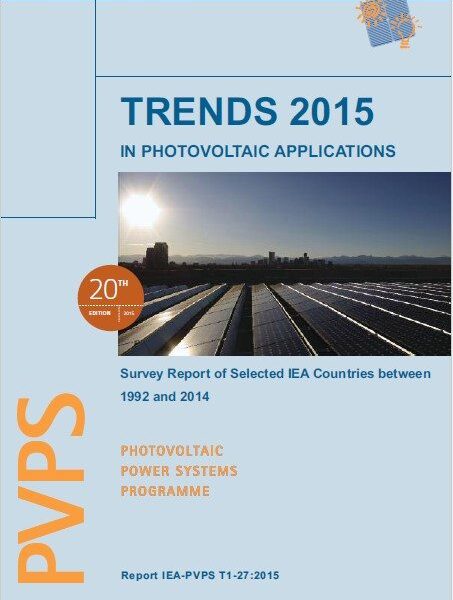 The International Energy Agency Photovoltaic Power System Programme (IEA PVPS) has published its 20th “Trends in Photovoltaic Applications” report. In a market where the main market driver remains the Feed-in Tariffs, Asia has taken the lead of PV development.

This unique report provides official and accurate data about the photovoltaic (PV) market, industry, support policies, research activities and the integration of PV into the power sector in the 24 countries reporting to the IEA PVPS Programme, plus a reliable estimate of the other most important PV markets.

After a years of fast PV market development, 2014 has been a year of reduced growth, with Japan and the US driving the growth. In total, about 40 GW of PV capacity were installed in the IEA PVPS countries and the other major markets during 2014 (2013: 37 GW). This raised the total installed capacity to more than 177 GW, with now more than 1% of the electricity demand coming from PV.

Asian countries represented the first regional market for PV for the second year in a row, with China (10.6 GW) and Japan (9.7 GW) representing 50% of all installations in 2014. American countries progressed (USA: 6.2 GW) while the market went down for the third year in a row in Europe (7 GW). Chile and South Africa were the most notable developments outside of the already developed markets.

Feed-in Tariffs (FiTs) remain the dominant driver for PV market development with 59% of PV installations in 2014 having been underpinned by FiTs. However, the share of new business models, including competitive PPAs, tendered FiTs and self-consumption-driven installations rose to more than 22%. In emerging markets, bids for utility-scale PV have reached record-low levels below 60 USD per MWh.

In at least 22 countries, the annual PV contribution to electricity demand has passed the 1% mark, with Italy at the top with close to 8%, Greece above 7% and Germany above 6%. The overall global PV contribution amounted to around 1.1% of the world’s electricity demand in 2014. 13 countries including Australia and Japan have also passed the 2% mark. Larger consumers of electricity such as China or the USA will require more PV capacity to reach the 1% threshold.

The PV industry produced close to 46 GW of modules in 2014, with a market significantly below that level and production capacities close to 70 GW. The lowest prices of modules continued to decline slowly in 2014, while the highest prices continued to go down. System prices continued to go down as well, in all parts of the world including Europe. In addition, the global turnover of the PV market remained roughly stable at 82 BUSD, due to market growth and average price decrease.

Finally, PV has extremely rapidly become a significant source of electricity in several countries worldwide. The speed of its development comes from its unique ability to cover most market segments, from the very small individual systems for rural electrification to utility-scale power plants (today above 600 MW in size). From the built environment to large ground-mounted installations, PV prevails as an energy source of choice, as a consequence of the various characteristics that make it suitable for most environments.