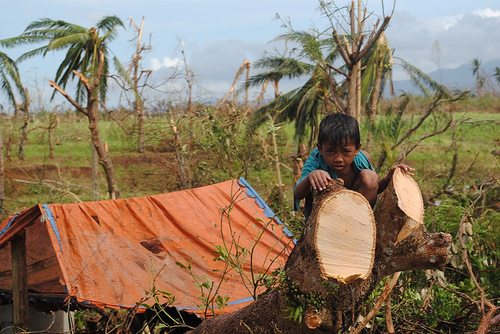 The devastation in the Philippines reminds us of our responsibility to stop profiting from the wreckage caused by companies whose business plan includes destroying the planet, writes Jamie Henn of 350.org.

We’re paying for the devastation caused by Typhoon Haiyan in more ways than we know.

Earlier this week, the governor of one of the regions in the Philippines hardest hit by Haiyan estimated that the cost of the storm and recovery could top well over $14 billion (£8.7 billion). The cost in lives is now believed to be well over 10,000.

It is moving to see the outpouring of aid from around the world. Thousands of people are donating online. The US has committed to provide $20m in immediate aid efforts and will hopefully contribute much more in the weeks and months to come. The UK has pledged at least £10m, while an appeal by the Disasters Emergency Committee raised £13m in its first 24 hours.

Haiyan wasn’t a natural disaster: it was a climate disaster; a disaster fuelled by the coal, oil, and gas companies that continue to pour billions of tonnes of carbon dioxide into our atmosphere, disrupting our climate and loading the dice for extreme weather events like Haiyan.

The fossil fuel industry and its allies are quick to point out that no single weather event can be tied to the climate disruption they’re fuelling, but scientists are making it increasingly clear that there are several ways climate change is affecting typhoons like Haiyan, and will continue to do so in the future.

Much of the global warming caused by human emissions of greenhouse gases is stored in the oceans. The sea surface temperatures near the Philippines are exceptionally warm: 2C above normal in some regions, on top of the baseline warming of 0.6C.

Since warmer air holds more water than cold, climate change is projected to increase the precipitation associated with tropical cyclones by 20% by the end of this century. Extreme rain is one of the largest threats from cyclones like Haiyan, since it can trigger landslides and flash floods.

Much of Haiyan’s destructive power came from the storm surge that the typhoon brought with it, a wall of water that drowned people in their homes, churches, and community centres where they were seeking refuge. Climate change has already caused about eight inches in global sea level rise and threatens to cause much more if left unchecked, making these storm surges all the worse.

The fossil fuel industry has made it abundantly clear that it has no intention of changing its business plan, even though scientists and economists have explained that in order to keep global warming below 2C, a globally agreed-upon target, roughly 75% of fossil fuel reserves must stay underground.

To make matters worse, every day corporations like Exxon, Chevron, Gazprom, and Shell are together spending hundreds of millions of dollars looking for new reserves, drilling the Arctic, blowing up mountains for coal and fracking our backyards.

And we’re paying them to do it. We give them the permission to profit from this wreckage with the dollars we invest in their companies. We let them keep their social license to operate by offering sponsorship of our arts institutions, our universities, and our public airwaves. And we let them greenwash by indulging in shareholder advocacy that amounts to little more than arranging the deckchairs on the Titanic.

Any institution or investor that has large amounts of money in the fossil fuel industry should take hard look at the devastation caused by Haiyan. Own a few shares of Exxon? Perhaps that fallen tree or knocked-over wall is your dividend. Own an entire company? Start claiming entire towns that have washed away. Count your profit in lives lost.

We all have a moral responsibility to reduce our emissions, but we have a far greater responsibility to stop profiting from the wreckage caused by companies whose business plan includes destroying the planet. Changing our lightbulbs, taking public transit, reducing our meat consumption: these are all important steps, but they’re not going to come anywhere close to addressing the climate crisis. We need massive structural change and it’s the fossil fuel industry that’s holding it back.

It’s our duty to take them on. It’s time to tell our public institutions to divest from disaster.

The growing fossil fuel divestment campaign has already spread to more than 500 universities, cities, and religious institutions across Europe, North America, Australia and New Zealand. As the campaign continues, we’ll be armed not only with financial graphs and economic models, but with pictures from Haiyan, Bopha, and Sandy, photos of the wildfires, droughts, flooding, and other disasters where climate change has played a role.

And we’ll tell our institutions, “This is yours. You’re profiting from this wreckage instead of investing in the solutions that could help prevent it. Now that you know the science, you have a moral duty to act. And we’re going to make sure you do.”

Jamie Henn wrote this article for YES! Magazine, a national, non-profit media organisation that fuses powerful ideas with practical actions. Jamie is co-founder of the activist group 350.org, where he serves as communications director and East Asia co-ordinator.