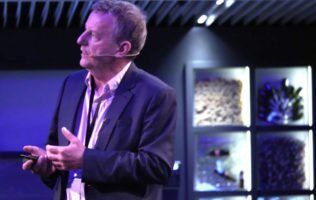 Founding Director of Solarcentury, Jeremy Leggett, spoke at an launch event for the Dutch version of his book The Winning of the Carbon War, in Amsterdam earlier this month. The British green-energy entrepreneur gave an informative insight into the war on carbon in a presentation, which can now be viewed online.

During the presentation Jeremy Leggett discusses his “diary from the front lines” and “the top ten stories of the great global transition”. He also comments in passing on the American presidential election and the EU referendum.

Mr Leggett’s main focus was on transitioning into a zero carbon economy, and he highlighted major milestones in the war against carbon emissions during his presentation. He spoke of Portugal’s use of renewable energy for four consecutive days, the implementation of solar panels in San Francisco, and Ikea integrating solar energy into its business.

A professional film of Jeremy’s presentation at the event, with intercutting powerpoint slides and commentary, can be viewed online here. The presentation lasts around half an hour and provides the most up-to-date summary of The Winning of the Carbon War and events in the great global energy transition.