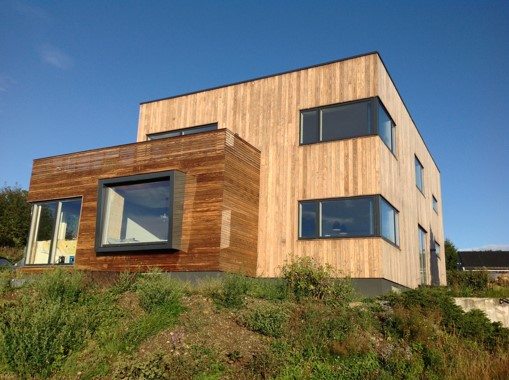 A traditional Scandinavian “Funkis” style house in Norway has been modernised and refurbished in line with ‘Passive House’ standards, which has strict environmental credentials, bringing the house into the 21st Century in terms of both design and performance.

Kontur Architects have designed this stunningly refurbished home, which overlooks Lake Mjosa, now attaining a high level of energy efficiency. The house is clad in Kebony, the sustainable alternative to tropical hardwood, which is both refined and hardwearing to deliver spectacular Scandinavian style and passive house credentials.

The four bedroom house, which has been subject to a complete renovation, has only the base walls, load bearing wooden-structure, staircase and chimney remaining from the original Funkis ‘functionalist style’ house, built in the 1930s. The interior of this house is now light and spacious with a minimalistic approach maintained throughout.  In addition, sustainability was fundamental to the design of this remarkable house, which now meets the Passive House requirements, wherein the energy consumption is minimised.

The owner and architect, Lasse Haldrup Juul, first discovered Kebony at the Aarhus school of architecture, when he became fascinated by the technology and the superior structural properties of the modified wood. The versatility of the wood enabled the architect to make use of the leftovers to create sustainable starling boxes, storage boxes for recycling and plant boxes to hold spices and vegetables.

Kebony’s superior environmental credentials set it apart from more conventional woods which would likely deteriorate over time or involve the use of environmentally-damaging treatment; it requires no maintenance beyond normal cleaning and has no harmful effects on the environment. Kebony wood proved to be an ideal material for the architect who required a low maintenance material that would be ‘as green as possible’, with the ability to stand the test of time.

Kebony was named as one of the world’s most promising clean technology companies in the Global Cleantech 100 for the third time in 2013, has been nominated as a 2014 World Economic Forum Technology Pioneer and has received numerous awards for its contribution to environmental measures and sustainability such as the Best Business Award 2014 for Best Innovation.

Lasse Haldrup Juul, the owner and architect of the property, commented “The feedback I have received for the Passive House has been immensely positive.  Timber is a material that has a particular visual appeal and Kebony allows its use without causing environmental degradation. Working with Kebony has transformed the character of the house, giving it an impressive yet neutral and organic finish.”

Adrian Pye, International Sales Director at Kebony said: “This Passive House is a fantastic example of how Kebony can be used to transform the exterior of a house into a sustainable home with exceptional quality design.”