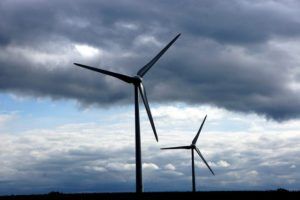 WWF Scotland confirmed this was first time this year this had happened and called for continued political support to enable Scotland to become a fully renewable nation.

Analysis by WWF of wind power data provided by WeatherEnergy found that for Sunday 7 August:

While Sunday’s weather caused disruption for many people, it also proved to be a good day for wind power output.

WWF Scotland’s director Lang Banks said: “While Sunday’s weather caused disruption for many people, it also proved to be a good day for wind power output, with wind turbines alone providing the equivalent of all Scotland’s total electricity needs. This major moment was made possible thanks in part to many years of political support, which means that across the year now renewables contribute well over half of our electricity needs.

“However, if we want this ensure we reap the many benefits of becoming a low carbon economy we need to see this political support for renewables continue. We also need the Scottish Government’s forthcoming energy strategy to set a goal of securing half of all of our energy, across electricity, heat and transport, from renewables by 2030.”

Karen Robinson of WeatherEnergy said: “Electricity demand during weekends is usually lower than the rest of the week. Nevertheless, the fact that wind power was able to generate the equivalent of all Scotland’s electricity needs shows just how far renewables have come.”