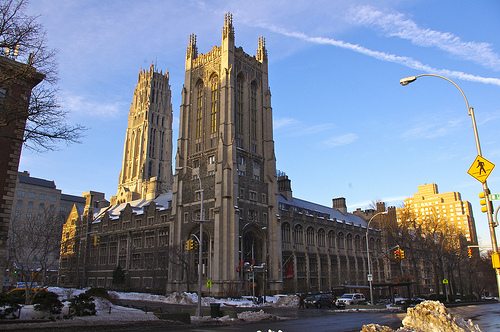 Union Theological Seminary in New York has become the first institution of its kind to divest its $108.4m (£64.57m) endowment from fossil fuels, which it says are a “sin” for Christians.

Writing in Time magazine, president Serene Jones explained some of the reasons that led to the decision to pull out of polluters – a move that its board of trustees voted for unanimously.

“As a seminary we are familiar with the scriptural warning that ‘the wages of sin is death’, and this could not be more literally true than it is in the case of fossil fuels”, she said.

“As vulnerable communities have been swallowed by rising shorelines, as potable water has become a commodity of increasing rarity, as hundreds of thousands of people have been killed by violent weather, it is ever clear that humanity’s addiction to fossil fuels is death-dealing—or as Christians would say, profoundly sinful.”

The seminary said that despite this, the decision hasn’t been easy – but it realised that it was not financially unwise to divest.

“We were heartened to learn that over the past two decades, a portfolio that had left out fossil fuel companies would have returned, on average, only six-tenths of 1% less. This is a small financial loss when compared to the importance of our moral statement”, she said.

Jones wrote that she knew that the move does not mean the end of fossil fuels predominance.

“Certainly, there is more work to be done, by Union and by all people of conscience”, she added.

“I hope our decision to divest encourages other seminaries and universities to recognize that there are things we can do as a country and as a people to cut down on our greenhouse gas emissions.”

A growing number of religious institutions have supported the case for fossil fuels divestment. In the UK, Brighthelm United Reformed Church (URC) in Brighton recently announced its intention to divest, becoming the first British church to do so.