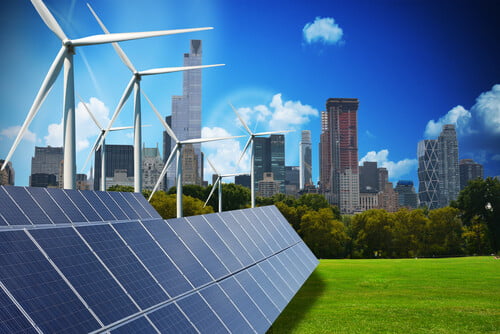 It was not that long ago that the mere notion of sustainable renewable energy used on a broad scale was considered a dream born from the minds of delusional eco-realists with shaggy hairdos. Back then the construction of wind turbines and solar systems was only possible with government subsidies. Not to mention that building solar panels and wind turbines were expensive and just not feasible in an economic sense; it was almost as bad as financial death or that is how some people thought of it.  A 1994 article by Harvard Business Review suggested it might be nearly impossible. Fortunately, things have changed since.

Since then, these eco-friendly options have become cheaper and more efficient. But more importantly something major is happening in the energy market, something truly astonishing. Finally, the construction of coal and gas power plants is more inefficient than the new wind and solar systems.

Is it already too late and the planet in its final death throes?

According to scientists, for things to remain pleasant on our home planet, global warming should stay below two degrees Celsius. That’s the main reason we need to get together on a worldwide scale and reduce our use of coal, oil, and gas. However, the mere notion of not being able to use fossil fuels causes unrest in many countries. Some experts fear that it is too late to save the planet.

A plethora of economists thinks the idea is impossible despite the clear signs that global warming is a fact. They say the 100 percent conversion to renewable energy will cost the global economy billions of Dollars. However, they forget to take a closer look at the other side of the coin. Not switching will cost the world more in natural disasters and death, an unfortunate side effect that is already taking place. 55 million people die each year; heart disease and cancer have been the top causes of death.

Another problem concerning the reduction in fossil fuel use is governments in developing and in many cases newly developed countries. Take China, for example, the biggest energy consumer on the planet, having overtaken the USA a few years ago. Their complaint, although to a certain extent valid, is that the West was allowed to do what it liked during the Industrial Revolution to get where they are, so why not us.

But is an end to fossil energy really in sight?

The warning signs are clear: “With the man-made emissions of 41 billion tons of CO2 in 2017, we are running out of time, making it so difficult to keep global warming well below two degrees Celsius, let alone below 1.5 degrees,” says climate scientist Corinne Le Quéré during the presentation of the latest report on the development of greenhouse gases at the UN Climate Change Conference in Bonn.

The majority of greenhouse gases are released by the combustion of coal, oil, and gas. According to Le Quéré’s forecast, this year’s CO2 emissions are 36.8 gigatonnes – about two percent more than last year. In addition, there are other greenhouse gases, which are mainly caused by the clearing of forests and agricultural production.

“The peak of global emissions must be reached in the next few years, and then emissions have to decline rapidly to meet climate change,” the climate scientist warns.

A crucial step in the reduction of greenhouse gases is the rapid replacement of coal, oil, and gas with renewable energies. According to a study also presented at the Climate Change Conference, global electricity production could be rebuilt relatively quickly and cheaply, cutting greenhouse gas emissions from today’s 14 gigatons of CO2 to 0.5 gigatonnes by 2035. That corresponds to a reduction of 95 percent.

Wind and solar energy and battery prices are currently falling rapidly. That’s why renewable electricity could be and in some cases already is cheaper than coal, oil, gas and nuclear power.

“The energy transition is no longer a question of technological viability or economic viability, but a matter of political will,” says the author of an energy study, Christian Breyer of the Lappeenranta University of Technology (LUT) in Finland.

Is the peak of coal use already behind us?

The current shift away from fossil fuels towards renewable energy is a significant change the world has not experienced since the energy revolution of 1880. From 1880, wood and charcoal were increasingly replaced by coal, oil, and gas.

Today, the growth of coal is decreasing. “2013 was the global highlight for coal,” said Bond. “We will see the peak of demand for fossil fuels in 2020 and then the gradual demise of demand for cars with combustion engines in 2021,” he predicts.

But will things really change in time?

Judging by recent technological development, in just 15 years, the world as we know it today, will have completely changed, ending the era of gas, coal and nuclear energy. Clean energy sources and smart cars will transform the structure of our fossil fuel-based economy more fundamentally and permanently than even the most stubborn advocates of green energy dare declare today. The good thing is that these are no blithe hippie aspirations but fact, as you will see in the next section of this article.

It won’t be long until a mass migration from cars with combustion engines to electric vehicles will take place. It is already happening today, and according to a 2017 article by Stephan Leahy for National Geographic, in the year 2040, e-cars will dominate the market entirely.

And to boot, cars will also have become autonomous vehicles. This fundamental change is mainly due to revolutionary cost reductions in information technologies and because electric vehicles are 90 percent cheaper to maintain and operate than conventional cars.

The biggest obstacle to the spread of electric cars for the mass market used to lie in the battery costs at $1,000 per kilowatt-hour in 2010 as opposed to today’s $190 per kilowatt-hour. Now the main barrier lies in the cost of building the necessary infrastructure – some governments could stop the transition dead in its tracks. However, battery costs will continue to decrease even more, but at the same time, the infrastructure for e-vehicles must increase to accommodate the growing fleet of e-vehicles.

Anyway, judging by the way things are going, $80 per kilowatt-hour or lower will be reached by 2025. By 2040, gasoline cars will be the horse-drawn carriages of the 21st century or even something to look at in a museum with your kids on a Sunday.

The economics of renewable energies

The simple reason for the superiority of solar and wind power over conventional extractive industries, such as oil and gas, is that extractive models inevitably run out, increasing costs – the death spiral began before the moment we started plundering the planet. In contrast, there is plenty of sun and wind.

Moving on, the green energy generation model is about rising yields and falling costs. The expansion of solar infrastructure is growing by the day. Prices for photovoltaic panels have declined significantly and the higher the demand for solar panels, the lower the cost of solar energy for everyone everywhere.

Take a look at these figures: The performance of globally installed solar systems has grown from 1.4 GW in 2000 to 141 GW in 2013 and 200 GW today. However, latitude and climate also come into consideration. In Colorado, for example, where the conditions are ideal for solar panels, a performance of up to 400 GW can be reached. The cost of solar panels is way cheaper than it used to be. This fall will continue until it will no longer be feasible to use oil, gas or coal.

The speed of change

The clean industries of tomorrow will be fundamentally different from the fossil fuel economy of today. This change will be among the most significant human transformations ever, on par with the Industrial Revolution and the rise of the Information Age in the 1990s. The only thing that could kill these developments dead in their tracks is government subsidies for coal, oil, gas or nuclear power – even if this is at the expense of the planet.

In the US, for example, there are about one million installed solar energy systems. By 2022, there will be 20 million – that’s an increase of twenty times in the space of under four years alone. In hundreds of markets around the world, subsidized solar energy is already cheaper than government-subsidized coal or nuclear power.

The efficiency of the systems continues to increase as, for example, the costs of lithium-ion batteries show. Greater battery efficiency increases nocturnal storage facility capability for wind and solar power plants. In other words, a clean energy operator can now run a storage facility for solar panels for eight hours a day, avoiding high price fluctuations and, at the same time, can cover demand peaks.

Many experts claim that solar energy has already passed ‘divine parity,’ meaning power production with roof solar panels is already cheaper than the cost of power conversion and feed. The death of fossil fuel power generation is inevitable in the long run, and the only thing standing in the way is old habits and government lobbies.

If you look at the world closely, we are in the midst of fundamental change affecting industry and society as a whole. Gradually, the model of large, centralized and top-down distributed energy production will be replaced by modular, more evenly distributed, knowledge-based and consumer-driven power generation. Renewable energy is already cheaper than traditional sources – the question remains do we still have enough time and the political capital to save the planet. As we have seen, the technology is there; now it is up to us to implement it.

Renewable energy used to be too expensive for most people to afford. That is finally changing as a number of factors are driving prices down. This could make a major difference int he way we choose to fight climate change. This is an encouraging trend for all us to embrace!